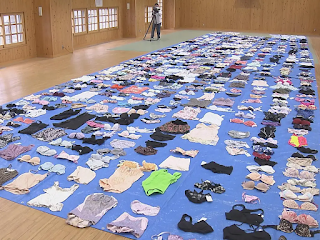 Japan Sept 7 2021 Police officers in the southern Japanese city of Beppu have accused a man of stealing 730 pieces of women’s underwear from coin laundries.

Authorities were first alerted by an unnamed 21-year-old female college student, who accused Tetsuo Urata, 56, of pilfering six pairs of underwear from her at a laundromat on August 24, per local news broadcaster Abema TV.

The city police showed up on Urata’s doorstep that week, where they found 730 pieces of underwear stashed in his apartment. Urata has been arrested and has admitted to the authorities that he stole the underwear found in his possession, according to Yahoo Japan News.

“We haven’t confiscated such a large number of panties in years,” a Beppu city police department spokesman told Abema TV.

The Beppu city police are currently carrying out further investigations into the incident, per MSN Japan.

Several other high-profile cases of men stealing women’s underwear have come out of Japan in recent years. This March, Takahiro Kubo, a 30-year-old electrician, was accused by the authorities in southwestern Saga Prefecture of stealing 424 pieces of underwear and swimsuits from teenage girls. He was caught when a resident in Saga filmed him attempting to steal a swimsuit drying on a clothesline.

In 2019, police arrested Toru Adachi, then 40, in Oita Prefecture on suspicion of stealing 10 pieces of women’s underwear from a coin laundromat, local news site Japan Today reported. The police netted a haul of more than 1,100 items of female underwear kept in futon cases at Adachi’s home when they searched his place.

Serial underwear theft happens in the US, too. In July, the Associated Press reported that Alabama police found more than 400 panties in the home of John Thomas Uda, 27. Uda was also accused of stealing underwear from laundromats in 2019, per the Daily Beast.