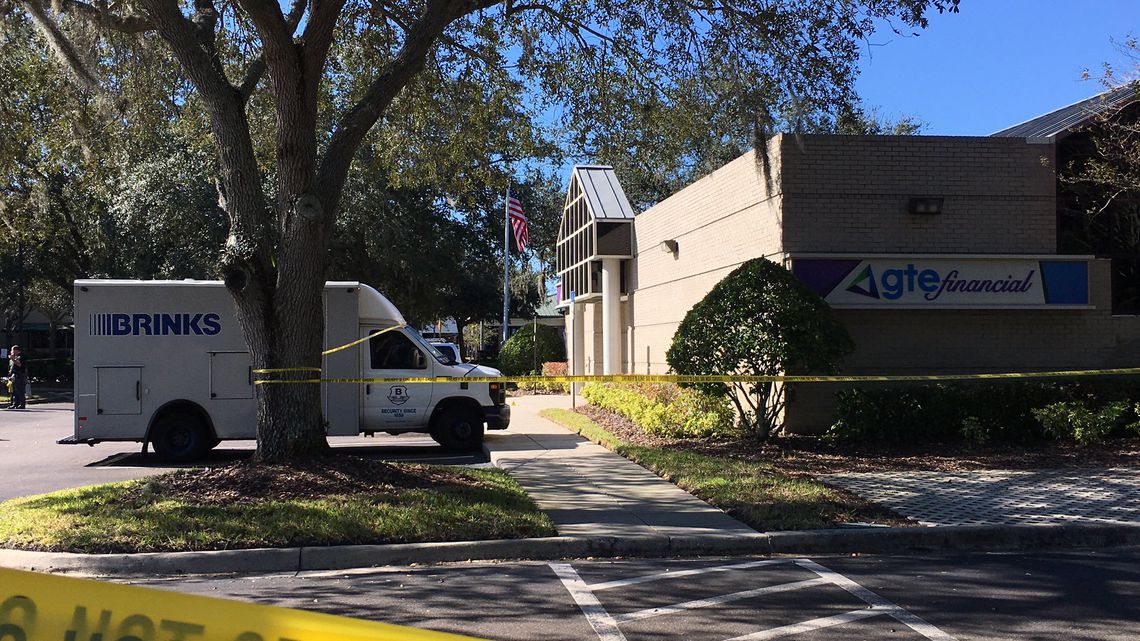 Brandon FL December 8 2019 A man who shot a Brinks security guard and a Good Samaritan at a Brandon credit union Friday remains on the loose.

And deputies are now working to determine if the suspect, who is believed to be armed and dangerous, is the same suspect linked to multiple bank robberies throughout the Tampa Bay area.

“He has elevated his degree of violence,” Hillsborough County Sheriff Chad Chronister said at a news conference on Friday night. Finding the suspect “is a priority,” he said.

Chronister made those comments outside the Bridgeport Apartments, about a mile away from the shooting.

Deputies tracked the suspect to an apartment building in that complex. But, after several hours of searching, the sheriff announced that the suspect was not there.

The search included the K-9 unit and SWAT team and focused on eight apartments inside a building where the suspect’s get-away car was found parked in front. Negotiators were put in place as well.

“We went unit to unit,” Chronister said. “He got into another car and fled.”

The incident occurred about 11:45 a.m. at GTE Financial, 101 E Bloomingdale Ave. As the guard replenished cash in an ATM, a man approached him from behind and tried to rob him, Chronister said at the initial news conference outside the credit union Friday afternoon.

The guard fought with the robber and was shot. A man who was in the parking lot waiting for his wife to come out of the credit union stepped in to help the guard and was also shot. Both were taken to the hospital with injuries that the sheriff said were not life threatening.

The security guard was shot twice, Chronister said Friday evening. One bullet struck his ballistic vest and did not penetrate his body. The other shot struck his torso.

The Good Samaritan was shot in the lower torso, the sheriff said.

Both were out of surgery and in stable condition, he added.

The suspect fled the scene and initially was believed to be at Bridgeport Apartments.

Deputies will maintain an active presence at the apartment complex throughout the night. There appears to be no threat to the residents living in the area.

“I do feel confident he is not here,” Chronister said late Friday in reference to the complex.