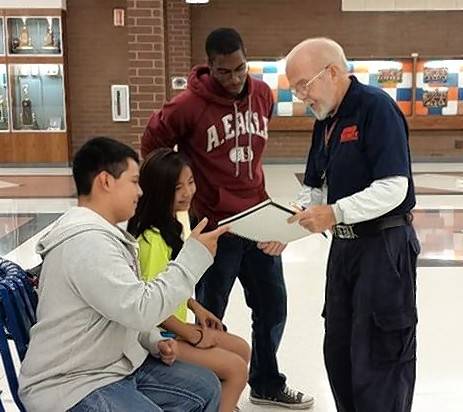 “I loved the Marine Corps. I would go again if they called, but my few years in school have been the most enjoyable of my life of everything I’ve done,” said Cederberg, of Mount Prospect, who is retiring as of the end of the school year.

Born in the United States to Swedish immigrants, Cederberg lived in his parents’ native country during America’s Great Depression. With the start of World War II, the family returned to the U.S. On his journey back, Cederberg’s ship was at one point examined by a German submarine.

“I don’t know if it’s exciting, but you’re certainly aware when there’s a German soldier standing two feet away from you holding a gun,” he said, recalling his wide-eyed, 10-year-old self.

When he first laid eyes on the Statue of Liberty in New York Harbor, he knew he was home. However, his new life would be full of ups and downs. Cederberg was the target of bullying and hazing in school due to difficulties learning English. To this day, he “hates bullies” and gravitates toward students who seem to be struggling.

As a high school senior, Cederberg enlisted in the Marine Corps for the Korean War. He returned home in 1954, and later married Nancy and together they had five children.

Cederberg opened his own printing business in downtown Chicago and did work for President Richard Nixon’s re-election campaign. Later, his former Marine executive officer, John Glenn, asked him to be his source of printing during his presidential campaign in 1983.

In 1987, the couple’s son, Kent, 24, died of AIDS. He and his wife created the Love & Action charity and shared their son’s story around the world.

But once Cederberg began working at Buffalo Grove High School in 1999, he said he realized he “should have been doing this all along.”

With 17 years under his belt, he explained there is a shared respect with the students.

“It’s a daily routine with some to shake hands with me,” he said, laughing. “I don’t completely understand it.”

In the four years students interact with him, many come up to chat or ask for advice. After an all-student body assembly Wednesday, some students stayed an hour to say goodbye. Many keep in contact years after they graduate

“He’s everybody’s adopted grandpa here,” Associate Principal Jill Maraldo said. “He goes way above and beyond the call of duty. He takes time to get to know students and truly connect to them in a way where they feel special and welcome and that’s how he became an iconic figure.”

She recalled during their three years of working together, Cederberg would leave notes on her desk asking her to check in on students and see if they needed help, noting he has an insight to the student population unlike anybody else.

Cederberg is retiring to take care of his wife, who has severe dementia. He said it is difficult to leave, but his wife comes first.

“I see it as a type of life we should all be living,” he said of his job satisfaction with his work in the halls of the high school. “Caring about those around us, doing what we all want to do.”