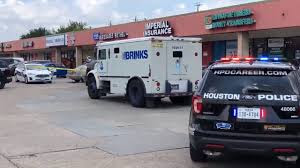 This week bullets flew at the scenes of three different armored truck robberies that endangered dozens of lives and caused chaos in three major cities.

In Houston Texas, an armed robber ambushed a Brinks armored truck security guard in on Thursday.

At least one gunman was waiting for the security officer when he walked out of DolEx Financial Services in the 6000 block of S. Gessner around 11:30 a.m.

The shopping center was busy just before noon as the security officer and suspected robber began shooting at each other sending numerous children and adults running for cover.

Rodolfo Pérez rushed to the scene after his wife called him to tell him there had been a shooting outside the money transfer business.

“I’ve got my two kids inside, a nine-year-old and three years old so you can imagine how I feel right now,” Perez said.

The family’s vehicle was struck by a bullet.

“If she was there in the car maybe they can shoot one of my kids or my wife, so thank God she was inside the business,” Perez said.

Bullets also pierced another vehicle and the DolEx window, but no one was hit.

The security officer was not injured, and the suspect robbers fled in a vehicle.

In Philadelphia Pennsylvania, the FBI has also released dramatic video of an armed robbery in Philadelphia in a bid to help catch the perpetrators who fled the scene with bags of cash.

The brazen heist took place at 10am Thursday in the bustling University City neighborhood, and was captured by several surveillance cameras set up in the area.

The heart-stopping footage, which has been shared to YouTube, begins with an armored Garda truck pulling up on Market Street to deposit cash into an ATM.

Shortly after, two bandits can be seen pulling up behind the truck in a dark red SUV before they emerge from the vehicle and make their way to the cash machine.

The men – clad in black hoodies and ski masks – then storm towards two Garda guards who are loading up the ATM.

One of the thieves brandishes a large assault rifle, while the second suspect holds a handgun.

Surveillance footage recorded by a separate camera above the ATM shows the pair confronting the guards before they grab heavy bags loaded up with cash.

As the men run back to their SUV, gunfire breaks out as both Garda guards shoot at the vehicle in a bid the halt the heist.

The car’s back window is shot out, as terrified civilians in the busy area can be seen trying to run for cover.

One of the men runs off on foot, while the second thief manages to scramble inside the SUV and speed off.

The men dropped both bags of money as they attempted to escape.

Police also discovered a handgun and a rifle clip containing 40 to 50 rounds of ammunition.

And in Santa Monica California, a knife-wielding man suspected of attacking a security guard and robbing an armored truck in downtown Santa Monica, caused the officer to fire shots at the man near the Third Street Promenade.

The man approached a Brinks Armored security guard in the area of Third Street and Arizona Avenue around 11:15 a.m., according to the Santa Monica Police Department.

He then tried to stab the guard, who responded by shooting at him three times, police said in a news release.

The assailant, who was not hit by the gunfire, fled the scene and was apprehended by police around 12:10 p.m.

He was found in the vicinity of a knife, money and a money bag, according to police.

The security guard also was uninjured in the incident.

The FBI and local police are investigating all of the armored truck robberies.