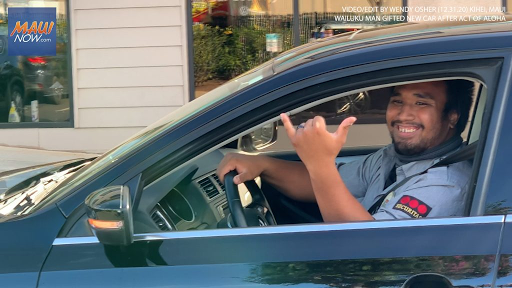 Aina Townsend, 22, of Wailuku, drove off in his very first fully-paid-for vehicle on New Year’s Eve. The man who works as a security guard at a local grocery store didn’t know that doing what he felt was right would land him in such a lucky position.

The car was a gift from the community, which came together to pay for the vehicle as a return act of kindness after Townsend found a wallet in a shopping cart and biked three miles uphill to deliver it to the owner, Chloe Marino.

Marino was doing some shopping with her five-month-old son Cooper at a grocery store in Kahului, and didn’t realize her wallet was missing when she got a knock on her door about two hours later.

“It was about an hour before my shift ended… and I figured, you know, I’m getting off of work soon… I might as well just give it to them to save them the hassle,” said Townsend.

“A couple of people came up to me and said, you know, they loose their stuff, they don’t think to look back to where they last were and they get a new ID, they renew everything–their credit and debit cards… ” he said.

Marino said the timing of the return couldn’t have come at a more welcome time. “We had a trip planned, so we were leaving for the airport the next day. I had my ID in there–essential stuff that you need to travel. Especially with the holidays–my credit cards to put gifts on and everything. It was just a true blessing.”

“It just takes a simple deed. You just do what’s right,” said Townsend. “That’s the main thing is what you do–you live your life by a code of honor and you strive through life with that code.”

“I’ll never forget it,” said Gray Marino, Chloe’s husband who was home when the wallet was returned. ” He said, ‘It’s Christmas-time. I’ve lost my wallet before. I didn’t want anybody to be without it.’ Sort of in shock and amazement, I looked at the wallet. Everything was in there. Nothing was touched. I was just blown away by this act,” said Gray who wrote a simple post on Facebook as what he calls an ‘aloha moment.’”

After he signed off on the 2017 Jetta sedan, Townsend drove off the lot and back to work. “I’m always a busy man. I’m always working every day,” said Townsend, who works at the Kahului Airport as well, in addition to his security job. “I’m still going hard, and never giving up–that’s the main thing.”

Townsend is a 2016 graduate of Waiʻanae High School and moved to Maui five years ago. He is currently living with his grandma and grandpa-in-law and was working and going to school for a while, but said he left school and has been working two jobs to support his family.

“I just want to say thank you to the community… and most of all to Chloe and Gray and the Marino family and to Greg for organizing the fundraiser that is allowing this dream to become a reality. It means so much to me. It will not be forgotten. Words can’t really explain how much I love you guys at the moment, but I appreciate everything you guys have done for me,” said Townsend.

“I just felt like it was something that needed to be rewarded,” said Greg Gaudet, a friend of Marino’s husband, who organized the GoFundMe account, which raised more than $25,000 in less than two weeks.

“I know what it’s like to be hard working and making ends meet and riding a bike to work. I’ve been very fortunate that I’ve had a car most of my life, but I have had periods where I rode a bike and took the bus and it’s hard. I couldn’t imagine going that far out of my way to do something for somebody I don’t even know. I just thought that it was such a big deal,” said Gaudet.

“With everything going on, there’s so much negativity going on. I felt like that person really did something positive, totally selfless, and that should be rewarded,” said Gaudet, who got the idea from a similar gesture he saw on a Netflix program in which money was raised for a single struggling mother to purchase a car.

“I was blown away,” said Gaudet of the international response to the campaign, which was picked up by CNN and local broadcast TV stations. When the campaign launched, Gaudet had hopes of raising $3,000 to $4,000, to help Townsend with a reliable car.

“It’s just unbelievable. It just shows the response–the way the story resonates with people,” said Gaudet. “And I think it created a chain of events where his positive action led to another positive action, and now it’s been shared around the world.”

“Everyone just really liked the story. So here we are at KarMart. ʻĀina is now trading in his bicycle for a car, and will be driving home today to start 2021 with a brand new car for doing nothing more than just showing a little aloha and making sure our family was okay before Christmas,” said Gray.