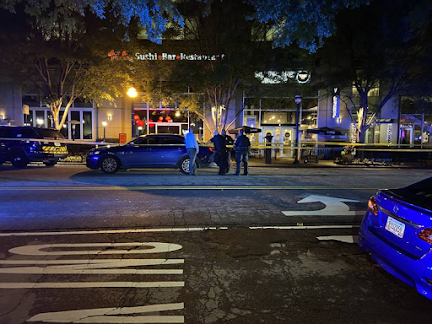 ATLANTA GA June 12 2021— Police are investigating what led up to shots being fired at a popular midtown Atlanta restaurant late Thursday night.

Officers responded to Ra Sushi Bar and Restaurant off 10th and Peachtree Street just before 11:30 p.m.

Atlanta police said an employee of the restaurant was in some sort of argument with another employee and the restaurant’s off-duty security guard stepped in to intervene.

The shooter ran from the scene and the security guard was taken to the hospital and listed as stable.

The gunman has not yet been arrested.

A bartender at the neighboring Sugar Factory said he heard several gunshots and people ran for cover.

“There was just so much commotion. There were servers, staff, everyone was running trying to get out of the way,” Malcom Archibald said. “Five minutes later, there’s security outside. There’s blood on the sideline. It’s just not what you expect in Midtown.”