Man dies after being tased by Santa Rosa police officers 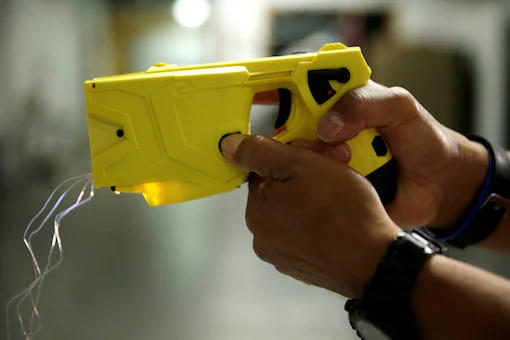 Santa Rosa CA Nov 22 2021 A man suspected of firing a rifle in a residential Santa Rosa neighborhood suffered a medical emergency after being tased by officers and died at a local hospital early Thursday morning.

According to Santa Rosa police, officers responded to calls that someone was firing a gun shortly after 1 a.m.

Pas matched descriptions provided by witnesses and was found walking in the street at the west end of Peach Court near Corvey Avenue.
He was no longer carrying the gun but brandished a large landscape rock at officers attempting to calm him. When he allegedly refused to comply with an officer’s direction, he was shot with a Taser and hit the ground.

Pas still attempted to resist arrest but officers managed to handcuff him and turn him on his side, at which point his condition deteriorated, police said. Officers attempted lifesaving measures and emergency medical personnel were summoned. A rifle was located nearby along with evidence of gunfire, police said.

All of the responding officers were wearing body cameras, which have been turned over to investigators. An independent investigation will be conducted by the Sonoma County Sheriff’s Department and the District Attorney’s Office in accordance with county policies around in-custody deaths.

The Santa Rosa Police Department will handle its own investigation.