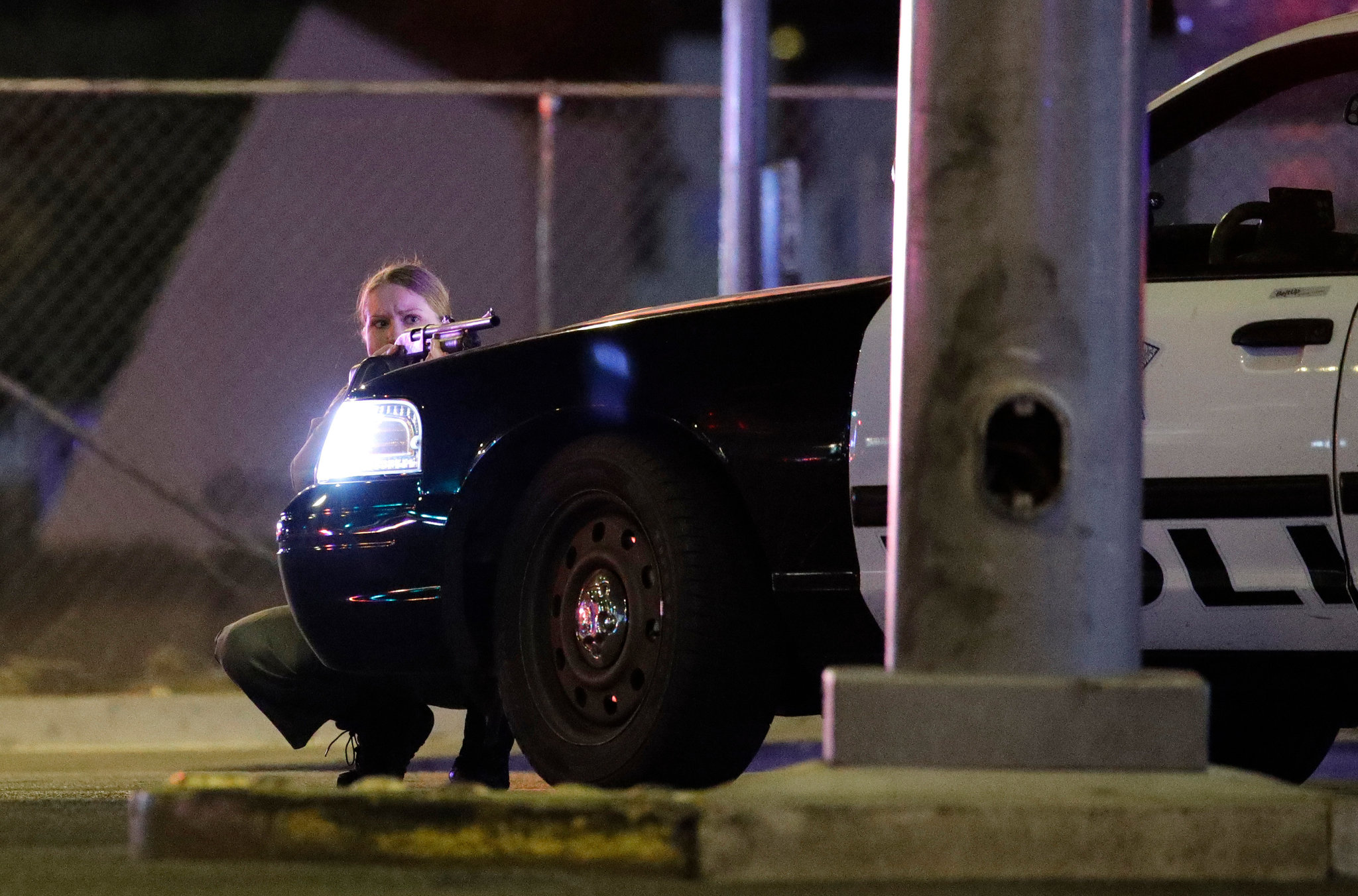 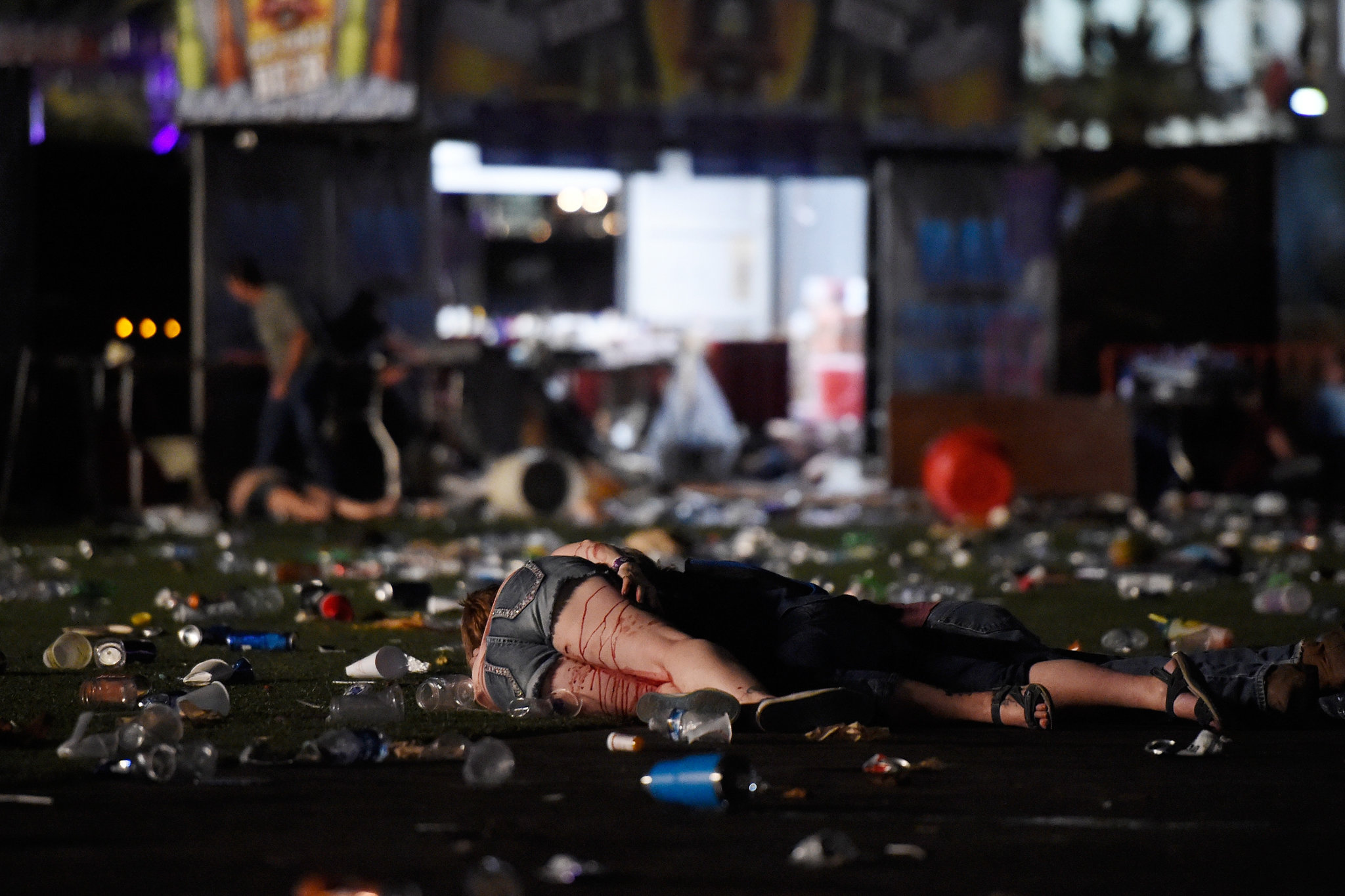 LAS VEGAS NV Oct 2 2017  — A gunman at a Las Vegas hotel rained a rapid-fire barrage on a huge outdoor concert festival on Sunday night, sending thousands of people fleeing. At least 50 victims died, and hundreds of others were wounded, officials said, making it one of the deadliest mass shootings in United States history.

“We believe the individual killed himself,” said Sheriff Joseph Lombardo of the Las Vegas Metropolitan Police Department on CNN.

Online video of the attack outside the Mandalay Bay Resort and Casino showed the singer Jason Aldean performing outside at the Route 91 Harvest Festival, a three-day country music event, interrupted by the sound of automatic gunfire. The music stopped, and concertgoers ducked for cover. “Get down,” one shouted. “Stay down,” screamed another.

Several SWAT teams were sent to the hotel immediately after the first reports of the shooting at 10:08 p.m., and officers overheard on police radio reported being pinned down by gunfire. Shortly before midnight the Las Vegas police reported that “one suspect is down,” and soon thereafter the police said they did not believe there were any more active gunmen.

The Las Vegas police said Monday that 50 people were killed and 406 people had been taken to the hospital. The police identified the gunman as Stephen Paddock, 64. Sheriff Lombardo said the police were seeking “a companion” named Marilou Danley, and the authorities later said they were “confident” they had located her.

Eric Paddock, a brother of Stephen Paddock who lives in Orlando, Fla., told the Orlando Sentinel that he had made a statement to the police. “We are completely dumbfounded,” he said. “We can’t understand what happened.”

Video of the shooting captured nine seconds of rapid-fire, continuous bursts, followed by 37 seconds of silence from the weapon amid panicked screaming. The barrage of gunfire then erupted again in at least two more rounds, both shorter than the first.

In the confusion after the shooting, the police also descended on the Ali Baba Restaurant, about a 10-minute drive from the Mandalay Bay, and they also investigated reports of a shooting at the New York-New York Hotel and Casino, not far from the concert ground.

The police reported clearing out the Mandalay Bay’s 29th floor and working their way up to the 32nd floor. A police Twitter post described reports of an “active shooter” near or around the Mandalay Bay casino.

Video from the shooting showed Mr. Aldean, the final performer of the night, running off the stage as the gunfire erupted.

Jake Owen, a country singer who was on stage with Mr. Aldean when the shooting began, told CNN on Monday that it was like “shooting fish in a barrel from where he was.”

“This is not an exaggeration: This shooting was going on for at least 10 minutes,” he added. “It was nonstop.”

Concertgoers described hearing round after round of gunfire. “Everyone was running, you could see people getting shot,” Gail Davis, one of the witnesses, said. “I’ve never been that scared in my life,” she added. “To have this happen, I can’t wrap my mind around it.”

“It just kept coming,” one of the witnesses, Robyn Webb, told The Las Vegas Review-Journal. “It was relentless.”

They said they saw about 20 people bleeding in the street.

“That’s when we knew for sure it was real,” said her companion, Matt Webb.

The police reported closing off about a mile of Las Vegas Boulevard and asked the public to steer clear of the area.

A photo posted by a Review-Journal photographer showed emergency responders transporting one injured person in a wheelbarrow.

McCarran International Airport in Las Vegas said that some flights destined for the airport were diverted because of police activity. The airport is just east of the Mandalay hotel, and after the shooting there were reports of people fleeing the concert by running onto an airport runway.

The hotel itself was placed on virtual lockdown after the shooting, guests said.

“We went into the hotel and they started shutting down casinos,” Todd Price, a guest of Mandalay Bay, told CNN. “We tried to get into our rooms, and they shut down the elevators and started to get everybody out.”

The Route 91 Harvest Festival bills itself as “three days of country music on the Vegas Strip,” and Sunday night’s performance was the last of the festival. The site of the concert, the Las Vegas Village and Festival Grounds, run by MGM Resorts, sprawls over 15 acres and has a capacity of 40,000 people. The festival’s website said this year’s three-day concert was sold out.