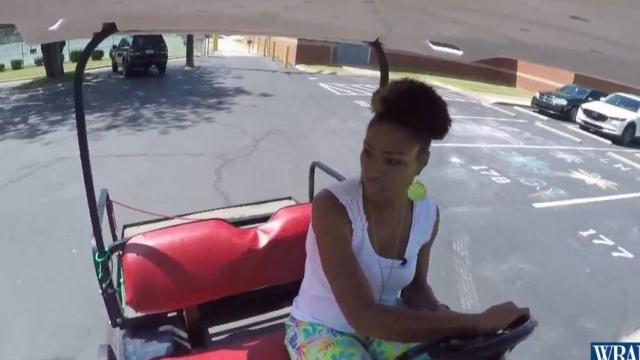 FAYETTEVILLE, N.C. Aug 31 2018 — With a new school year upon us, educators in Cumberland County are asking for volunteers to help patrol school campuses as a way to bolster safety on school grounds.

The program is known as School Angels and it’s a way of getting additional eyes and ears to identify any school threats.

The program is designed to monitor activity on school campuses by creating a safe and supportive school environment, that enhances safety and security measures during school hours while also building school and community partnerships.

“I usually start in the morning about 8 o’clock (and) start patrolling both parking lots,” said Demetria Davis, the Safe Schools Coordinator at Terry Sanford High School who uses a golf car to patrol the campus between classes. “I am making sure that we don’t have anybody on campus that shouldn’t be on campus.”

Nearly all of the schools in Cumberland County have locked doors, security cameras and school resource officers who patrol the hallways.

The volunteer School Angels will be added to the campus arsenal of safety tools.

“There are 87 schools here in the Cumberland County school system so we’re looking for individuals to be able to be a part of our campus,” said Kenny McKinnon, a School Angels coordinator.

The volunteers would be screened before they can join the force and they will be armed with walkie-talkies.

The angels would use their ears and eyes to report suspicious activities.

“There’s a lot of areas around our campus where we don’t have people (who can) be at the fence line or at the front of the parking lot,” said Tom Hatch, principal of Terry Sanford High School.

Some parents, like Terry Bradley, said they love the idea.

“With the school shootings, I think having an extra set of eyes to help out the administration (and) teachers is great,” he said.

For those who want to become a School Angel, participants have to clear a background check and be able to provide their own transportation to and from the school grounds. Participants will be trained.