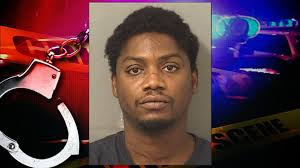 If you’re in the market for a fake temporary license plate or a counterfeit insurance card you won’t be able to call “The Tag Man,” according to Boynton Beach police.

Detectives received an anonymous tip that someone known as “The Tag Man” was providing the temporary tags for $60 and phony insurance cards for $100. The tipster also gave police a phone number that was registered to Pericles, the report stated.

On Jan. 30, an undercover officer texted Pericles and requested a temporary license plate. Pericles asked for the VIN number, car model and car color. They met in the parking lot of a Lowe’s Home Improvement store about 4 p.m. the next day and Pericles sold the officer a fake plate for $60. The fake tag had an expiry date of March 3, investigators said.

On Feb. 1, another undercover officer set up an insurance card purchase about 2:30 p.m. outside a Lowe’s store. Pericles drove up and sold him a fake card from the Ocean Harbor Casualty Insurance Company for $100, police said.

On Feb. 8, a third undercover officer met Pericles about 2:25 p.m. in the parking lot of a Publix at 1005 W. Gateway Blvd. and bought a phony temporary license plate for $60 that was set to expire March 8, detectives said.

On all three occasions, Pericles was driving a gold 1996 Ford Taurus with a driver’s license that had been suspended since December 2015, records showed.

All three transactions were recorded on video with audio, police said.

Pericles is charged with three counts each of counterfeiting a motor vehicle registration, falsifying records, uttering a forged instrument, organized fraud and driving with a suspended license. Bond was set at $36,000, records showed.