Thieves Made Off With $120,000 Worth Of Merchandise At Oakbrook Center Louis Vuitton Store 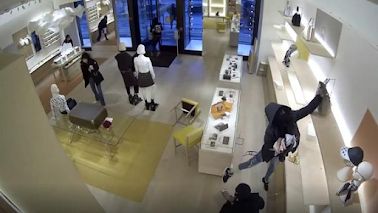 OAK BROOK, Ill. November 21 2021 Police in Oak Brook said Friday that thieves got away with $120,000 worth of merchandise in a grab-and-run theft at the Oakbrook Center Mall Louis Vuitton store.

Oak Brook police were called to the store following a report by mall security at 3:31 p.m. Wednesday. Police said 14 suspects sped off in three different cars after stealing items from the store.

Surveillance video shows a crowd of people wearing black or red hoodies storming into the store while what appear to be shoppers or staff run out of the way or duck.

Some of the thieves nearly crash into each other as they grab handbags off shelves. One of them jumps to reach an item on a high shelf. The thieves also knock over chairs and knock a mannequin askew from its position as they take the items and finally run rapidly out the door.

Police also said late Friday that they have found one of the crew’s getaway cars – a stolen Dodge Charger recovered in Chicago.