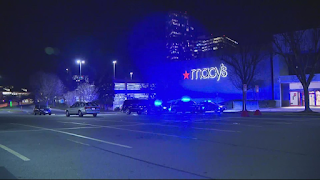 After two incidents sparked panic inside Tysons Corner Center, WUSA9 sat down for an exclusive interview with the Tysons Urban Team.

This is a specialized unit within the Fairfax County Police Department that patrols this shopping area daily.

“Our officers are out in cars, on bicycles and on foot, stopping shoplifting,” said 2nd Lt. William Arnest.

In recent weeks, there have been two incidents at Tysons Corner Center that sparked panic and evacuations.

On January 1, police say someone took a hammer and smashed several display cases at Elite Jewelers inside Tysons Corner Center. People were seen running through the mall, and some took to social media claiming there was an active shooter situation. Fairfax County Police immediately sent out a tweet that no shots were ever fired.

On December 18, two suspects were taken into custody and a gun was recovered inside Tysons Corner Center. An off-duty officer apparently spotted three people at the mall who they believed were connected to a robbery in Arlington.

That investigation also set off panic across the shopping center, and many took to social media to say people were running from the mall. Fairfax County Police posted that night on Twitter, that no shots were fired at Tysons Corner Center.

In both incidents, Fairfax County Police say they made it a priority to stop misinformation from spreading and to make sure people knew there was not an active shooter situation at the mall.

These latest incidents came months after another frightening situation the mall over the summer. Fairfax County police confirmed a report of shots fired at Tysons Corner Center mall was actually a fallen light fixture that caused a scare on Aug. 7. The mall did go on lockdown as police were investigating the reported shooting.

Back in June, the mall was evacuated on a Saturday afternoon after shots were fired during a fight. Police said no one was hurt in the shooting. Three people were treated for minor injuries suffered in the evacuation.

It’s retail theft like smash-and-grabs, or grab-and runs-where “they go into those stores, collect as much as quickly as possible and then run out of the store,” that Master Police Officer Howard Mergler says are the more frequent crimes they investigate.

“We’ve had cases where there are groups coming from Florida, the west coast,” Mergler said.

Among the 787 arrests the Tysons Urban Team made last year, only 159 of the people arrested were Fairfax County residents.

Regardless of what the situation is, the Tysons Urban Team says they are prepared.

“We do training at the range and at the police academy. We take that very seriously, especially in such a densely populated area as these different shopping centers,” Arnest said.

“We have officers there every day of the week. You’ll see us in uniform and we have additional officers in plain clothes,” Arnest said.