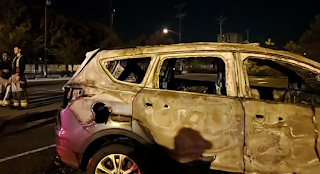 LOUISVILLE, Ky. September 29 2020 A car identified as a security patrol car, was set on fire Saturday night in a parking lot on the Spalding University campus hours after protesters seeking refuge from the city’s curfew gathered at a nearby Unitarian church.

Louisville Metro Police reported the fire at 11:50 p.m. Saturday on Twitter and responded to the intersection of South Fourth and West Breckinridge streets.
The person narrating the department’s Facebook livestream said fireworks went off inside the vehicle, which was parked in a lot near the intersection of South Third and West Breckinridge streets.
A WDRB News reporter at the scene heard loud bangs coming from the car while it was on fire. A Louisville Fire Department crew extinguished the blaze.

An eyewitness to the fire told a WDRB News reporter that a group of about 10 to 15 people were responsible for starting it. A WDRB News reporter at the scene saw police detain three people as lines of officers were blocking off the area around the burning vehicle.

Hours before the fire started, LMPD Sgt. Lamont Washington said police had made just six arrests that he said were “mostly curfew related.” Only three of the 25 people who were arrested were from out of town.

Police, fire officials, the Bureau of Alcohol, Tobacco, Firearms and Explosives and the FBI are working to identify who started the fire, according to a tweet from the FBI’s field office in Louisville. WDRB News reporters at the scene observed damage to windows at Presentation Academy and Spalding University as well as graffiti on buildings in the area.

In an update to the Spalding University community shared via Twitter on Sunday morning, President Tori Murden McClure said the car that was set on fire was a campus security vehicle. McClure also reported broken windows and glass doors at three university buildings said “the affected areas may be closed” to those on campus Sunday while Spalding’s facilities team clean up and repair the damage.

“While we denounce the dangerous, destructive acts that took place on our campus overnight, we want to make it clear that Spalding continues to support the struggle for equity in the name of social and racial justice,” McClure said. “Indeed, the vast majority of the demonstrations that have occurred for the past four months have been peaceful and lawful, and they are raising important awareness about systems of injustice in our country and the suffering that is taking place as a result of them.”