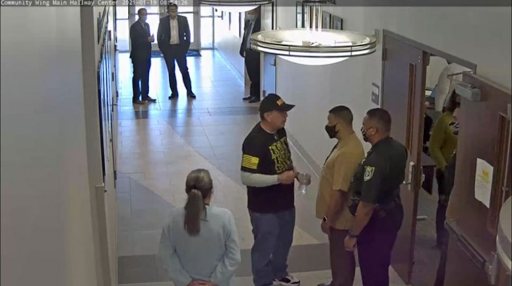 Palm Coast City Hall has added armed security and may soon have a metal detector at the entrance to its Community Wing, where City Council meetings and workshops are held.

One councilman calls it a “very bad” development that sends the wrong message to the public at large. A January 19 incident involving a man who refused to wear a mask and allegedly confronted city employees over several minutes, along with a series of occasionally tense meetings in recent months and a relatively wide-open City Hall to date have prompted the changes, which mirror changes in other government buildings in the region.

The changes, currently on a 90-day trial period, remain significantly more lax than when Palm Coast City Hall operated in what approximated lockdown for many of its offices when it rented space at City Marketplace for many years: There, the public had no access to most offices without a magnetized key card to operate elevators, and without an employee escort, though public meetings and high-traffic public offices on the first floor were freely accessible.

“I’m being proactive, and unfortunately that time is here, it may not even be a resident, it may not be a citizen, it may be someone passing through. But I do have valid security concerns,” City Manager Matt Morton told council members this morning. “I think we’re taking appropriate steps at this point.”

Palm Coast is not an outlier. Beefier security measures are beginning to crop up in local government buildings in step with a perceived rise in public tempers and increasing anxieties about the safety of employees or visitors to public buildings. The Government Services Building in Bunnell, which combines county government, school board and constitutional officers’ operations, has had its own private security for several years. Staring in July 2019, anyone attending a Deltona City Commission meeting or workshop had to walk through a $3,200 metal detector first. The measure was prompted by a meeting a month earlier when individuals addressing the commission devolved into insults against commissioners and other members of the public.  Ocala city government added an armed guard and metal detector at City Hall in 2017. Most courthouses, including in Bunnell, have metal detectors.

Nevertheless, while there are occasional reports of violent acts at local government buildings, the more common crime has trended toward cyber attacks on government’s IT structures, seeking ransom by locking down computer networks. There were at least seven such attacks on Florida municipalities between 2018 and 2019. Last Friday a city’s utility in Pinellas County was attacked by hackers who sought to poison the water system.

Palm Coast City Council member Eddie Branquinho said he recently got a call from a resident asking him “why do we need security at the door of City Hall. I couldn’t answer the question,” he said.

“We’ve got a few specific reasons,” Morton said. “One is just the national, political landscape and the climate unfortunately has impacts across the country. We’ve had a few incidents in city hall that seem to have been escalating over the last year, I would call them confrontations. Traditionally we’ve asked staff to de-escalate those confrontations. They’ve gotten to the point where it’s inappropriate for staff to be put in that position of de-escalating. We have many ex-law enforcement officers here who are generally more than happy to assist, but that’s not an appropriate role for them to be undertaking. We didn’t have an immediate safety or response plan. When the [Flagler County Sheriff’s Office] deputy is here on site, we have a phenomenal resource, we have a phenomenal resource all the time, but they’re not always here on site, and when they are, their job is not to be a hall monitor. In essence, to ensure safety–not just of our employees, but safety of all of our residents frankly deserve. So we just came through a situational moment two council meetings ago where we had a very bad situation unfold at City Hall.”

A city report and surveillance video obtained by FlaglerLive narrate the Jan. 19 incident Morton was referring to. It took place in the minutes before a morning council meeting. (See all the video footage from different angles below.)

At 8:51 a.m. that day, a late middle-aged man wearing sneakers, jeans, a cap and a t-shirt with the words DON’T TREAD ON ME emblazoned on its front walked through the main entrance to the city administration offices. The wording was ironic. As the city sees it and as videos depict him and his demeanor, he would soon be the one treading on others and their safety by ignoring a city ordinance requiring all those inside the building to wear a mask. (Upholding Palm Beach County’s mask mandate, an appeals court last month said the requirement is not an infringement on personal freedoms any more than prohibitions on indoor smoking are an infringement, but rather, in both cases, a protective measure for others.)

The man has not been identified.