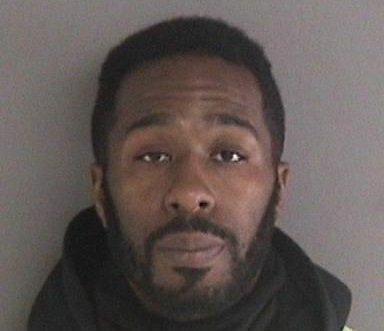 SAN LEANDRO CA May 18 2020 A Bay Area man was arrested by Alameda County sheriff’s deputies Wednesday morning when he drove to the Eden Township Substation to inquire about a backpack deputies had seized days earlier and during the exchange was found to have a loaded assault rifle, a metal baton and ammunition in his Mercedes, authorities said Thursday.

The suspect, Rico Thomas, 32, who listed his occupation as security guard on jail records, was being held Thursday in lieu of $155,000 bail. He claimed to be a transient, but had listed addresses in Vallejo and Oakland up to 2017, the sheriff’s office said.

Thomas was inquiring about a backpack that had been seized by deputies three nights earlier as part of a different investigation.

Sheriff’s deputies had been called to a home to investigate a report of domestic violence and child endangerment involving Thomas after Alameda County firefighters initially responded around 9 p.m. Sunday.

Deputies said Thomas had fled the scene before they arrived and could not be found, but took possession of the backpack.

About 8 a.m. Wednesday, Thomas showed up at the substation in his Mercedes to inquire about the backpack.

When deputies attempted to detain him in the parking lot in front of the station, he was uncooperative and got into a physical struggle with deputies causing them to use force to overcome his combative behavior, authorities said.

Deputies said Thomas has a prior felony conviction for assault with a deadly weapon and is on searchable probation.

The Mercedes, which is registered to him, was subsequently searched. Inside the vehicle, deputies found a loaded AK-47 assault rifle, an expandable metal baton, loaded high capacity magazines and additional ammunition.

Alameda County Sheriff’s Sgt. Tya Modeste said the department is actively directing residents to online resources in the wake of signs that the pandemic may have increased vulnerability to violence or other crimes.

“We’re trying to get it out, to collaborate with our partners on messaging that victims come in various forms, and may be women, children or men,” said Modeste, who added that the department was starting to see increases in domestic-violence incidents under the shelter-in-place order.

“People can text 911 if they are unable to call, they can still obtain orders. If they call 911, they can leave a line open and active, and that helps us with location. We don’t want people to feel helpless because of the pandemic.”

On the issue of the zero-bail policy instituted by the state judicial council and intended to limit COVID-19 exposure for low-level offenders, Modeste said law enforcement leaders were continuing a conversation.

“Sheriffs and chiefs of police are talking to judicial partners, and trying to encourage them in situations where people have histories of violence that may make them bad candidates for bail,” Modeste said. “We encourage judges to do that so we aren’t seeing individuals get out whose charges may be for brandishing a weapon but who may have previous jail time for assault with a deadly weapon.”

Thomas was arrested and booked into Santa Rita Jail on a number of felony weapons charges, felony domestic violence, child endangerment, willful cruelty to a child and resisting arrest. He is due to be arraigned in court Friday.