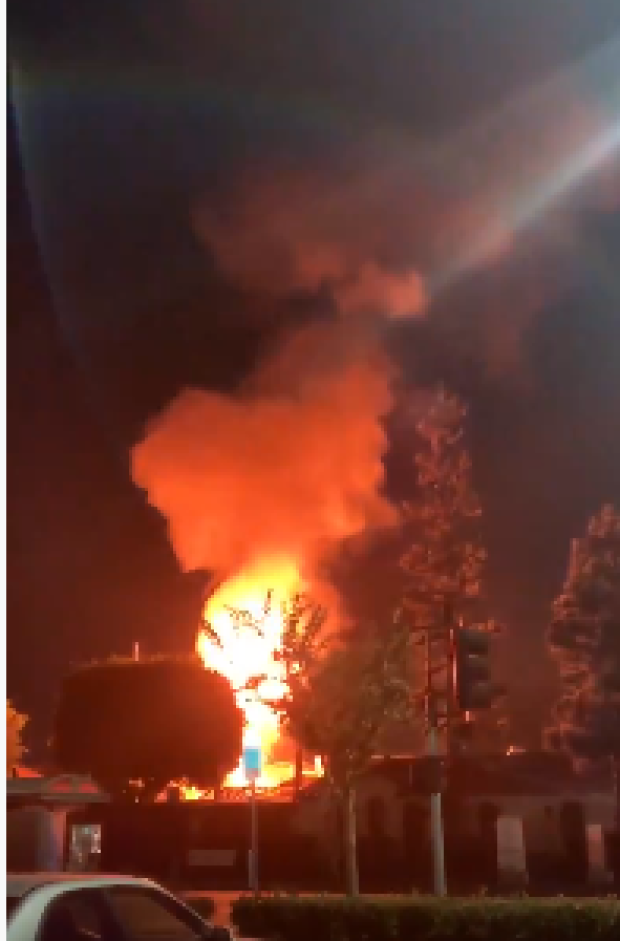 Two firefighters and a security officer were injured late Saturday in a “large explosion” and fire at a shopping and dining complex in Huntington Beach, California, the Huntington Beach Fire Department said.

The area, which was hosting an Oktoberfest celebration, was ordered evacuated.

Huntington Fire Department Chief Jeff Lopez said firefighters were at the scene around 8 p.m. Firefighters were with a security guard at Old World Village event complex investigating an reports of an electrical fire.
When they went to the vault to investigate, they reported an explosion, Lopez said.

The explosions came quickly, one after the other. Some witnesses described power outages as the first fireball shot up over the crowded Old World Oktoberfest celebration on Center Drive.

As firefighters got up, they noticed the employee that led them in was missing, Lopez said. They were searching for the person when another explosion followed about a minute later. The employee’s condition is unclear.

A preliminary investigation found that one of the restaurant’s three transformers exploded in an underground vault, authorities said.

The chief described the fire that resulted from the explosions as minimal, and said crews were able to extinguish the flames quickly.

Hundreds of people are believed to have been at the event at the time. The chief described a “dazed” crowd standing outside as crews were trying to manuever through to get to the fire.

Another witness said she was standing in line waiting to get in to one of the venues when she saw “a ball of flame that came up,” followed by two more.

“Every one just panicked and just started running every which way,” Glenis Peters said. “It was just chaos.”

She described her friend grabbing her hand, and the two running away together, fearing everything would go up in flames.

“It was really scary, you can feel the heat from it,” Peters said. “It was a huge ball of flame.”

One employee working at the event said that she smelled what she thought was gas shortly before the blasts.

Lopez said they are still investigating the cause of the fire.

Thousands Of Donors Give Over $400,000 For Slain Flint Security Guard’s Family