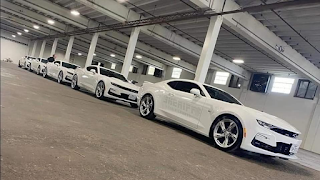 The HCSO is utilizing “ghost decals” on some cars.

The ghost car, which is a rigged-out Chevy Camaro, has police graphics, lights and sirens, as a regular police vehicle would, but no top emergency lights.

The reflective graphics blend into the cars’ paint, making it difficult to spot on the road.

One user on Twitter warned residents about these ghost cars on the Houston roads.

Chron first reported on the ghost cars in 2013, when the Harris County Constable’s Office deployed Ghost Patrol Vehicles on the county’s toll roads in order to blend in and observe violations.

According to the Harris County Sherriff’s Office, the purpose of the ghost decals is “to support our multi-pronged efforts to get dangerous drivers off our streets so that we might ultimately shed our region’s dubious distinction for having the nation’s deadliest roads.”

Although the “ghost car” concept is nothing new to Houston, the Chevy Camaro looks inconspicuous whether it’s day or night.

There’s been a mix of opinions from Houston residents on whether the “ghost cars” are really a good idea.

Jose Lazo on Facebook shared his grievances about the ghost decals.

“When did police become a source of revenue? This whole ghost decal isn’t right in any way. You’re hiding from the people you’re supposed to protect!”

Robert Zeus Reid added some lighthearted fun to the conversation by saying, “Well then they can’t get you for evading now or running from the cops …. all you have to say is you thought the race was onnnnnn!!!”

Harrison Broer says “What a complete non-waste of taxpayer dollars.”

The concern about taxpayer dollars seemed to be shared by many. Bill Glazier says, “They can buy all this but our deputies are paid poorly, along with Firemen and Teachers.”

Deputies have no problem blending in with regular traffic, but there is no mistaking that the ghost car is a police vehicle.