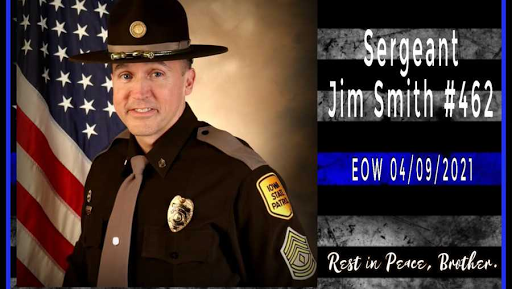 Law enforcement agencies have identified the trooper killed during a shootout Friday night, and the suspect has been taken into custody.

Iowa State Patrol and the Division of Criminal Investigation has identified the trooper as Sgt. Jim Smith.

On Friday night at about 7:22 p.m., officers conducted a traffic stop on Michael Thomas Lang, who attempted to flee. He stopped at 250th Avenue and got out of the vehicle. Authorities state Lang said, “shoot me.”

Law enforcement said Lang then assaulted and disarmed an officer, placing the officer into a choke hold.

More law enforcement arrived on scene and gave commands to Lang to put up his hands. Lang did not comply and officers said Lang yelled, “come get me.” Authorities said Lang then got into his vehicle and fled the area.

A deputy pursued Lang into Grundy Center but lost sight of him. Law enforcement went to Lang’s residence at 305 G Ave. He found Lang’s vehicle parked in the driveway and Lang entering his residence.

More law enforcement agencies arrived and set up a perimeter around the home that Lang was barricaded in. Lang’s father arrived and told officers his son had multiple firearms in the home.

At about 8:55 p.m. four Iowa State Patrol troopers and a K9 unit made entry into the residence through the garage. The team identified themselves before entering the home.

Law enforcement said while the team was clearing the upstairs of the residence, Smith was hit with gunfire coming from inside the residence. After Smith was shot, the entry team saw Lang emerge from the doorway holding a black, pump-action shotgun.

Two members of the entry team retreated to the basement, while other members pulled Smith from the residence.

Authorities said Lang then barricaded himself in the residence. The entry team in the basement claimed Lang made multiple statements about shooting Smith and, “expressed the desire to shoot more police officers,” said Mitch Mortvedt, with the DCI.

At about 11:50 p.m. an ISP tactical team attempted to make entry into the residence with a wheeled armor personnel carrier. During the entry, law enforcement said Lang shot at the personnel carrier in which three members of the team returned gunfire hitting Lang multiple times.

Lang was then taken into custody.

Smith was immediately transported to a local hospital where he was pronounced dead from a single gunshot wound.

Lang was transported to the University of Iowa hospitals where he underwent surgery for multiple gunshot wounds and is currently in critical condition.

Lang has been charged with first-degree murder and is being held on a $1 million cash bond.

Authorities said the investigation is ongoing and the family is asking for privacy at this time.