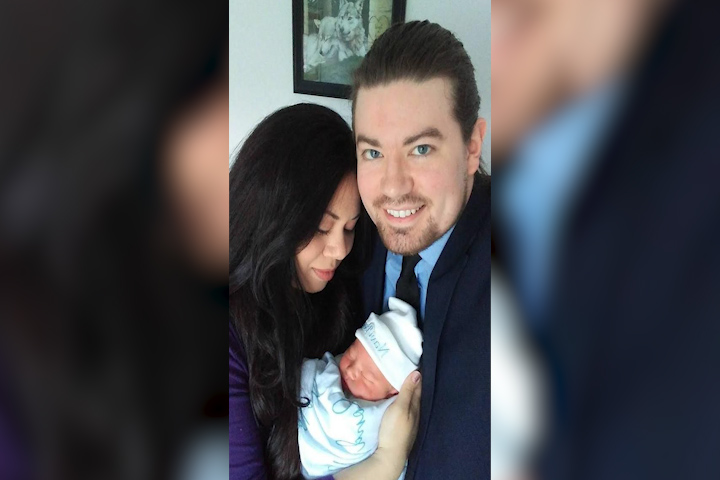 For one, she gave birth on the pavement outside the hospital after she and her husband frantically tried to get inside the facility but were met with locked doors.

And in a sign of these pandemic-defined times, her husband, David Patrick, used a face mask to bind the umbilical cord.

To rewind a little bit, let’s go to the early morning hours of May 9, when Sarah told her husband that her contractions were a sign that it was time to go to the hospital.

Leaving their two other children at home with grandparents, David and Sarah rushed to Baptist Health Louisville on Kresge Way a little befo 3 a.m.

As they tried to enter the Women First pavilion at the hospital, the first set of automatic doors opened, but then the second set wouldn’t budge.

‘Daunting and unsettling’: What it’s like to give birth in the midst of a pandemic

David and Sarah Patrick couldn’t get through locked doors at Baptist Health Louisville, so she delivered their son, Navi, in the parking lot. Louisville Courier Journal

They tried another set of doors and found them locked. Then Sarah’s water broke as she stood on a service road by a parking garage outside the facility.

“We’re in the middle of the street, and she can’t move,” David said. “She nearly collapses in front of the labor and delivery sign.”

He said he then helped Sarah lie down before pondering next steps.

“I’m not a doctor. I don’t have a number to reach anyone in the building. We’re basically in a concrete wilderness,” David said. “She’s in a lot of pain, and she’s ready to get this thing over with.”

So he called 911 and quickly explained the situation to a dispatcher, who then proceeded to talk David through the next steps, starting with removing his wife’s pants so that the baby could come out.

“I put my phone speaker and set it down. My wife is screaming. … ‘He’s coming! He’s coming!'” David said. “I suddenly see about a third of the top of my new son’s head so I was like, ‘Oh my gosh. This is really happening.'”

Within 10 to 15 seconds after the newborn’s head popped out, David said the rest of the body “just flips out like a fish.”

The 911 dispatcher then directed him to wipe the baby’s face and mouth, and David said he wrapped his new son in his leather jacket. The newborn was crying, a good sign.

The dispatcher then told David to bind the umbilical cord, so he rummaged through a bag to try to find something, anything to help.

“We both had boots on, so we didn’t have shoe strings available,” David said. “But my grandmother had knitted COVID-19 masks for the family. I found a mask and rolled it like a really tight tortilla.”

Soon after, an ambulance along with several nurses showed up to get Sarah and her newborn son on a stretcher.

“Congratulations, you did wonderful,” the 911 dispatcher told David.

Navi means “prophet” in Hebrew, while Bond refers to James Bond, “one of my all-time favorite franchises,” David explained.

And how were Sarah and Navi doing in the hospital after the rather less-than-ideal conditions for birth?

“Breathing fine. Perfectly healthy, and no complications,” David said. “It was even the least complicated delivery of the three kids. And for my wife, they asked on a scale of one to 10 what her pain level was, with 10 being the highest, and she said a one and maybe needed ibuprofen. That’s all she took.”

David added that the Baptist Health nurses and doctors were “wonderful” and that no hard feelings were held after the locked door fiasco.

The hospital’s security director came to the couple to apologize for their unfortunate ordeal outside in the cold and to explain how Baptist would take lessons from their experience to help improve in the future, David said.

Baptist Health officials said they were happy everything worked out.

The proud parents and Navi were able to leave the hospital Monday morning and return home to an excited group of siblings and grandparents.

The Patrick’s oldest daughter is 3-year-old Hadassah, the Hebrew name for “Esther,” and their other son is 1-year-old Asher, named after the Hebrew word for “happy” or “blessed.”

And Navi’s birth adds to what was already a busy birthday month for the family, as Sarah also turned 36 on Monday and David turns 30 on May 21.

“Everybody’s happy. Everybody’s healthy,” David said. “We thought we had planned for everything, but obviously there were a couple little holes in the plan.”