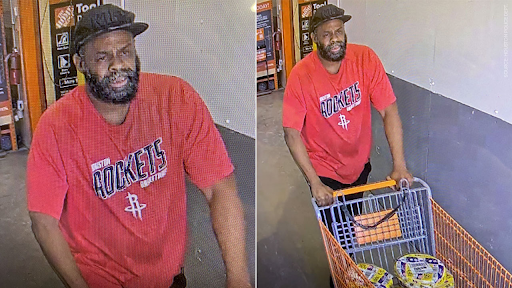 Houston police said a female officer in uniform who was working an extra security job at a Home Depot was dragged about 100 feet by a theft suspect’s vehicle Wednesday.

According to police, the officer fired at least one shot as she was being dragged by the vehicle going in reverse in the parking lot located in the area of the Gulf Freeway and Woodridge at about 10:20 a.m.

Police added the officer held on to the passenger side door of the suspect’s vehicle.

The officer, who was not immediately identified, was sent to the hospital with non-life threatening injuries.

Before the parking lot confrontation, police said the suspect was confronted by the store’s loss prevention officer when it was found that he tried to push his cart outside without paying, resulting in shoving between the two.

In the wake of the incident, police released images of the man they believe stole construction cable from the store and later caused the officer’s injuries.

Acting on a tip, HPD said the suspect was arrested after a call for him to turn himself in was put out Wednesday.

According to HPD, the suspect sustained a gunshot wound to one of his legs. Upon his arrest overnight, he was taken to the hospital.

Police had not yet released the suspect’s identity.