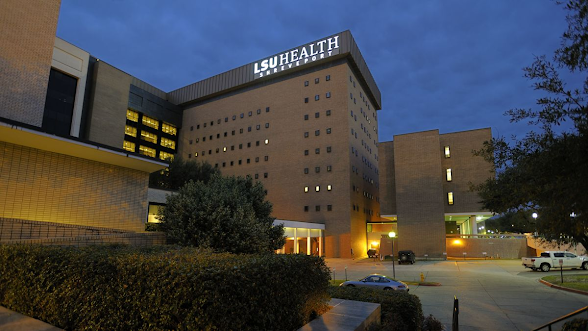 SHREVEPORT, La. Feb 5 2021 Police have released the identity of the man they suspect attacked two workers, including his mother, with a large knife at Ochsner LSU Health in Shreveport.

Authorities are circulating a photo of Chatman in hopes of apprehending him. But, Heckard notes, it’s not his most recent photo. He currently has short dreadlocks.

Police used surveillance video to confirm that he fled the scene driving an older model, green Saturn SUV, reported to be a Vue.

Late Monday night, KSLA News 12′s Doug Warner caught an image of a vehicle matching that description being hauled toward downtown Shreveport. He said it was found at Overton Brooks VA Medical Center.

Earlier Monday, Chatman’s family indicated he also could be wanted for murder in New Orleans.

Police have not confirmed a connection between the attack at the Shreveport hospital and the homicide Sunday in New Orleans.

But the suspect in the New Orleans homicide allegedly also used a machete and was seen driving the same vehicle that Shreveport police say their suspect last was seen driving.

KSLA News 12 showed images from WVUE, our sister station in New Orleans, to family members of one of the victims in the Shreveport attack. They told us that it is the same man.

The attack at the Shreveport hospital happened the afternoon of Monday, Feb. 1. A man attacked two employees there while armed with what police described as a large knife.

Police used surveillance video to confirm that he fled the scene driving an older model, green Saturn SUV, reported to be a Vue.

The workers’ wounds did not appear to be life-threatening, Heckard said.

Two women outside Ochsner LSU Health told KSLA News 12 that their 48-year-old cousin, who works as a nurse at the hospital, is conscious and talking but fighting for her life after having been attacked by her son, who was armed with a machete.

Caddo 911 dispatch records indicate 18 units responded to a report of an armed person at 2:27 p.m. Monday, Feb. 1. At one point, well more than two dozen police units were at the Shreveport hospital.

The Fire Department dispatched two units to a medical emergency at 2:43 p.m. at the same address.

Employees outside Ochsner LSU Health told KSLA News 12 that they received a Code Silver alert, which a hospital spokeswoman later explained means no one could enter or leave the hospital.

An alert sent to hospital employees at 2:46 p.m. said an “LSUHS employee has been attacked with a machete in the Comp Care building.”

It went on to state that the assailant has short cropped hair and was wearing a white shirt and black pants.

“Do not go outside until you are notified that assailant has been apprehended. UPD and Shreveport police are both actively working to locate and arrest suspect. If you see an individual matching the description above, call UPD at 675-6265.”

“The safety of our team, patients and community is our greatest priority. An incident occurred at our Kings Highway Campus at approximately 2:30 p.m. today. Local law enforcement was immediately dispatched and hospital security initiated a Code Silver for the safety of our patients, visitors, staff and providers. An All Clear was issued at 4:00 p.m. We are fully cooperating with law enforcement and will be sharing additional updates as available.”

Also on lockdown for a while was Shriners Hospitals for Children — Shreveport, which is located nearby in the 3100 block of Samford Avenue. That lockdown has since been lifted, a spokesman said.

Authorities urge anyone with any information about Chatman or the attack at Ochsner LSU Health in Shreveport to call Shreveport police at (318) 673-7300.

Crime Stoppers will pay up to $2,000 for information that leads to the identification and arrest of those responsible for this crime.