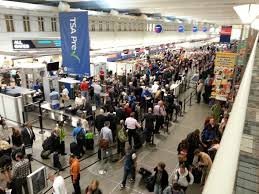 MINNEAPOLIS MN January 10 2019 A 31-year-old man from Richfield has been arrested after trying to get through a TSA security checkpoint without a boarding pass at Minneapolis-St. Paul International Airport Tuesday morning.

The MSP Airport police said the incident happened at about 3:15 a.m. in the northern ticketing area.

Police said that Isse Dijale Ali tried to get through the checkpoint, but when he was stopped, punched two officers responding to the scene.

One of the two officers required treatment at the scene and the other was taken to the hospital.

Airport police say Ali has been taken to Hennepin County Jail and is being held without bail.

Ali was previously charged with assaulting an officer at the airport, having been taken into custody after punching an officer when he was apprehended in an area not open to the public. That incident happened in September 2016.

The case remains under investigation.
WCCO