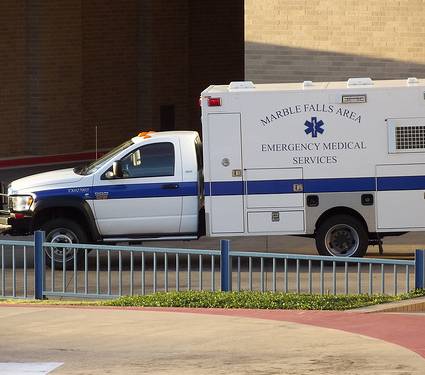 MARBLE FALLS, Texas  November 12 2019 — A 65-year-old Texas veteran who served in the Marines as a helicopter pilot is now working as a paramedic.

Curtis Raetz caught the “service bug” again in 2016 after three decades in the military and retiring from a civilian career as an information technology project manager, and became a volunteer firefighter and EMT with Spicewood Volunteer Fire Department and EMS, according to DailyTrib.com.

“Going back to being a Marine, I’ve always wanted to serve,” Raetz said.

At the age of 64, Raetz returned to school to become a certified paramedic. He completed his studies and rotations at hospitals and with EMS units, and recently received his certification.

During his six years on active duty with the Marines, Raetz piloted AH-1 Cobra and CH-53 Sea Stallion helicopters. He said his experience in the military helped him develop skills he now uses as a paramedic.

“When you’re flying, you’re thinking about what’s happening three to five miles ahead of you,” he said. “I learned how to put the other things in compartments in my brain.”

Alabama cop of 50 years still not ready to retire

‹ R.I. Casino Security Nabs Off-duty Police Officer For Theft › Inside the decline of rural America’s police force and its pipeline of new recruits