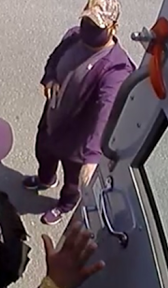 LAUREL, Md. July 15 2021— A man is wanted for an armed robbery of an armored car in Laural, Maryland, according to police.

On Monday, July 12, around noon, Laurel Police officers were called to the 7100 block of Virginia Manor Court for a report of an armed robbery and shooting.

When officers arrived on the scene, they located the one victim involved in the robbery, according to the police department.

The armed robbery happened when the man, armed with a handgun, approached a security service delivery driver, disarmed him, and then demanded he hand over the U.S. currency deposit bag he was holding, Laurel Police said.

The man complied and then the suspect fired one shot at him before fleeing the scene. The driver was not injured during the robbery, said police.

Detectives are seeking to identify the suspect in the pictures below.

The suspect operated a two-door Honda Accord that is black in color with a rear spoiler and Maryland flag registration plates, also pictured below in the Twitter post from Laurel Police.

This is an ongoing investigation, and we strongly encourage anyone with any information, or who may have witnessed any of these events, to please contact the Laurel Police Department at 301-498-0092, also anonymous tips can be sent to LPDtips@laurel.md.us.