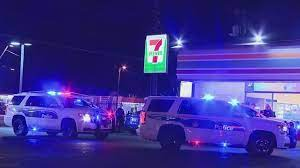 PHOENIX AZ July 23 2022 – An investigation is underway after police say a security guard shot a man in self-defense at a Phoenix 7-Eleven.

“The security guard shot the individual who was taken to a local hospital with non-life-threatening injuries,” Sgt. Brian Bower said in a statement on July 21.

“The individual shot will be arrested pending medical release.”

It’s unclear what led up to the shooting.

No identities were released by police.