Public Safety Officer of the Year 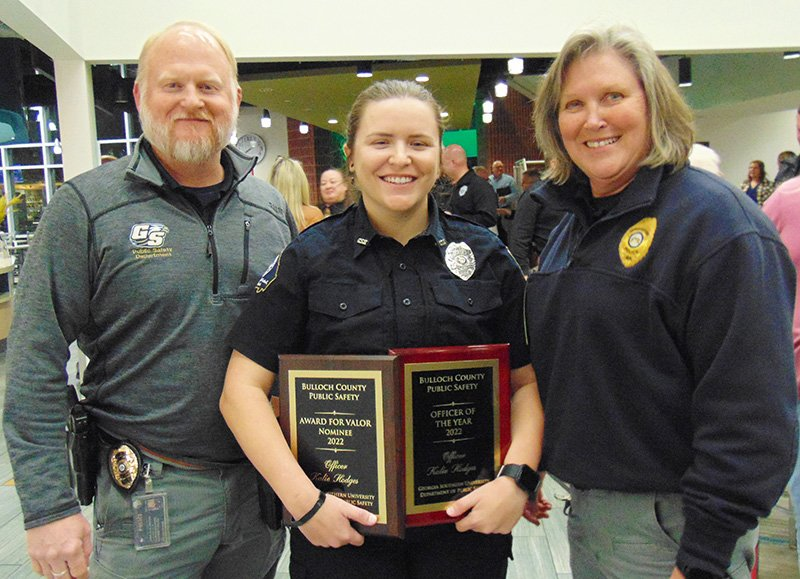 Statesboro GA November 19 2022 Officer Katie Hodges of the Georgia Southern University Police was less than two years into her career as a law enforcement officer when her actions on April 8 saved a 21-year-old student from drowning in a pond on campus. During a banquet Thursday, Hodges was named Bulloch County Public Safety Officer of the Year.

The annual ceremony recognizes public safety professionals whose valor and service within Bulloch County exceeds the demands of routine duty. In all, 11 city, county, state, regional and college agencies nominated public servants, all recognized during the banquet, held this year at Lakeside Dining Commons on the Georgia Southern campus. Two Meritorious Service Awards, one posthumous, were also presented.

“I’m honored,” Hodges said afterward. “I mean I’m in a room full of heroes, and just to be named among all these people, I’m just honored, and I love what I do and I love working for Georgia Southern, and Bulloch County.”

The narrative of the April 8 incident was supplied by GS Deputy Chief of Police Clay Gracen in nominating Hodges. Some details have been filled in by Hodges and Georgia Southern Chief of Police Laura McCullough.

That night, Hodges and fellow GS Police Officer Ryan McBride, on patrol in separate vehicles, observed a Chevrolet Trailblazer with the engine running in the Paulson Stadium parking lot.

After a brief time passed, they noticed that the vehicle had not moved and no one had gotten out. Hodges then approached the Trailblazer and noticed there were two people inside. She spoke to them and “determined both were under the influence and unsafe to drive,” Gracen wrote.

Hodges called and made arrangements for a sober driver, who she indicated was an off-duty deputy the occupants knew, to come and take them home safely. The sober driver reportedly said he could be there in 15 minutes.

Meanwhile, Hodges had to turn her attention to another incident but was still able to observe the Trailblazer. After about 20 minutes, another vehicle approached and the Trailblazer then left the area.

So Hodges at first thought the deputy was driving the Trailblazer, but decided to follow to make sure, she said. Appearing to be driven normally at first, the vehicle traveled down Malecki Drive and turned right onto Akins Boulevard. But at the T-shaped Forest Drive intersection, the vehicle failed to stop at the stop sign and ran straight across Forest Drive and into the pond.

Sometimes called a reflecting pond, it was previously only two or three feet deep but had recently been excavated to remove sediment and for repairs to the dam. So the water was more than 10 feet deep, and the Trailblazer’s momentum carried it to the middle of the pond, where it started to sink, Gracen wrote.

And the occupants were still the apparently intoxicated pair Hodges had seen in the Paulson parking lot.

She was able to talk to the passenger, who jumped out of the car and was able to swim out.

But “the driver needed some assistance,” Hodges said in an interview Thursday. “She was able to get into the water, and she started screaming, ‘I’m drowning! I’m drowning!’ So I decided to rip my stuff off and get out there.”

In other words, the officer quickly removed her duty belt and body-armor vest before jumping in to rescue the driver, taking hold of her and swimming to safety at the pond’s edge.

“Officer Hodges’ quick actions that night not only saved the life of a 21-year-old student but also prevented a parent’s worst nightmare,” Gracen wrote in the nomination narrative. “Her disregard for her own safety was not for glory or recognition, it is a reflection of her true character.”

Gracen called the young officer – Hodges is 24 – “a natural leader,” “calm under pressure,” who has “a tremendous work ethic.”

Originally from Ludowici, Hodges came to Georgia Southern as a student in 2016 and graduated with a bachelor’s degree in biology in 2020, also joining the university police force that year. She is now a Georgia Southern graduate student, working toward a master’s in criminology.

Certified through the Law Enforcement Bicycle Association as a Class A Police Bike Patrol Officer, Hodges in recent months has started riding in the department’s Bike Patrol Division, as well as serving with the Uniformed Patrol Division.

Her parents Angelisa and Kevin Hodges and grandparents Kathy and Kirby Hodges attended the banquet, where she had been certain to receive a plaque as one of the 11 nominees. Her father is a former Georgia State Patrol senior trooper.

Of course, police work isn’t all jumping in for rescues. Asked if any charges resulted from the April incident, Hodges said the driver and passenger, “took a ride with the State Patrol.”