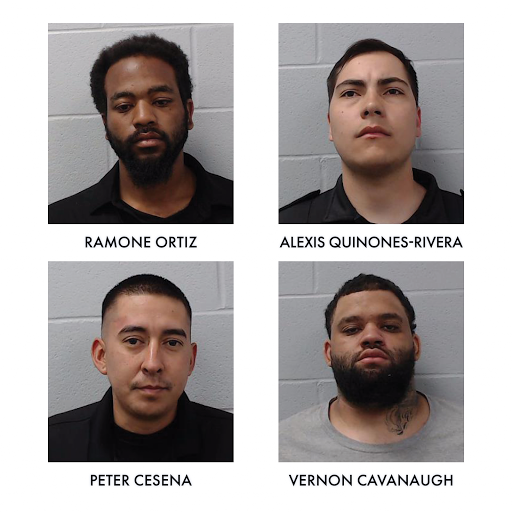 Four men were arrested Saturday night near a local restaurant after they were caught impersonating security officers.

The San Marcos Police Department responded to Industry — 110 E. MLK Drive — at approximately 10:09 p.m. on Saturday following a report of suspicious activity in the parking lot.

The complaint received by SMPD stated that the four men were wearing bulletproof vests, wearing handguns on their belts, playing with the guns out of the holster and were drinking in the parking lot, according to an arrest affidavit obtained by the Daily Record.

Officers identified the four suspects as Ramone Ortiz, of Killeen; Alexis Quinones-Rivera, of Temple; Peter Cesena, of Fort Hood; and Vernon Cavanaugh, of Cedar Park. Police said they observed Cavanaugh wearing body armor and a “Security” vest. He also had handcuffs in his possession. Ortiz, Cesena and Rivera all had handguns, SMPD said.

According to police, the four men said they were hired as paid security detail for a private event, however, none of the men were licensed as required to be a legal security guard in Texas.

SMPD arrested the four men and charged them all with impersonating a licensed security officer. Additionally, Ortiz was charged with unlawful possession of a firearm by a felon and three counts of possession of a controlled substance.

Officials said three of the four suspects were released from the Hays County Jail on Sunday. Quinones-Rivera and Cesena were both released on a $4,000 bond. Cavanaugh was released on a $6,000 bond. At the time of publication, Ortiz remained in the county jail on a $32,000 bond.