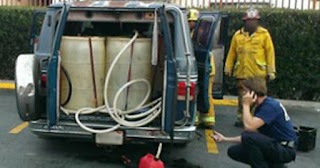 With gasoline in many places now hitting well over the $5.00 mark, especially diesel, fuel thefts are on the rise, once again.
Everything from a few gallons to hundreds of gallons.

Security officers patrolling residential communities, shopping centers, and malls, and really, just about any place where vehicles are parked, or gasoline is stored or sold, should be on high alert.

While you may think of this as a petty, small-time crime, in some cases it’s much more. Some have turned it into a profitable, large-scale multi-area, and in some cases, high-tech caper.

Recently, a security officer in Loveland Park Colorado was patrolling the parking area of a business complex in the middle of the afternoon. He observed a man who he thought was probably an employee of one of the businesses, kneeling in between vehicles.
As he walked towards the area to ensure that everything was alright, a second man popped up from behind another vehicle, two aisles over. The security officer noticed the doors of a commercial van were open.
He had stumbled upon a large-scale gasoline heist.

The first man quickly ran to where the van was parked and yelled for the security officer to get back while showing a gun that was tucked into his waist. The second man grabbed some plastic tubing that was laying on the ground, jumped into the van, and quickly exited the property.

Similar thefts in the past few months have been reported in Florida, Connecticut, and Michigan.

Mike Gross has seen a lot of theft at his family’s dealership in Neillsville, Wisconsin, over the years, including wheels, tires, cash, and entire vehicles, but this was new.

A service technician was preparing to inspect a used Jeep when he discovered a gas leak. The tech put the vehicle on a hoist, and “as soon as he put it in the air, everybody could see that somebody had actually drilled a hole into the fuel tank” to steal the gas, Gross said.
The thief at the Wisconsin dealership caused about $1,500 in damage to the Jeep for some three gallons of gas, Gross said.

But thieves elsewhere are reported to have gotten away with thousands of dollars in gasoline.

Three men held an overnight unarmed guard at gunpoint while a small tanker truck filled up its tank with diesel at the municipal garage just outside of Houston Texas. The men fled and the security guard was uninjured.

Mandeep Singh, a gas station owner in Duncanville, Texas, has had about $27,000 worth of gas stolen over the past few months. While he would not say exactly how thieves accomplished this for fear of copycats, he did say that he thinks a guy must be working for some type of gas dispenser company because he had way too much information,” Singh said, such as “how to take parts out (of the gas dispensers) and play with the system. No normal person can do it; the only person who can do that is someone who actually works for dispensers.”

Thieves are coming up with novel ways to steal from gas stations. In Houston, Texas, they parked a minivan with a trap door over a station’s underground fuel tank and tapped into the tank to steal 1,000 gallons of diesel over a three-day period, said Jerry Thayil, owner of the Fuqua Express station.

In North Carolina last week, almost 400 gallons of gas were stolen by thieves who were able to bypass the payment system. A car pulled up to the Bizzy Bee Grocery Store and Gas Station in High Point recently, and someone appeared to use a device on the pump to get gas without paying. Then, more than 15 cars pulled up and filled their tanks over the course of 45 minutes, taking $1,600 worth of gas.

Police investigators have previously reported that some of those involved have been armed. One suspect in a has theft in Ohio nearly ran over a man who was writing the vehicle’s tag number down.

These might be some telltale signs of a large-scale gasoline heist in progress:

Prior to approaching suspicious persons, security officers should call the police or radio their dispatcher or co-worker with vehicle details, license plate number, when possible, a description of the vehicle and the persons involved.

When in doubt, stay out and wait for law enforcement.