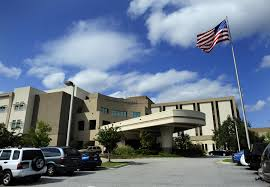 Augusta GA June 9 2019 A security officer at Doctors Hospital was arrested after an altercation with a patient Monday.

According to an incident report, a patient arrived at the emergency room around 1 p.m. and was still waiting for a doctor about 6 p.m. as she sat in the ER wheelchair by the door.

After calling for assistance several times, the patient raised her voice and cursed to get the attention of nurses.

A nurse and security officer responded, and the patient agreed to wait outside because of her language. After another nurse and patient attempted to calm her down, Waters moved the patient away from the door, according to the report.

The patient told Waters she wouldn’t be able to hear her name called at the new spot.

According to the report, she attempted to stand up, but Waters tried to place her in a chokehold and dragged her over the back of the chair. A tussle ensued, resulting in the patient sustaining bruises and scrapes on her back.

The patient refused treatment afterward, and a banned notice was issued.

According to the report, another security officer and a witness intervened during the altercation to try to separate Waters from the patient.

Waters said in a written statement that the patient had grabbed his wrist and started to get out of the wheelchair while cursing at him.
Waters said he tried to get her back in the chair, but she began swinging her arms. He tried to grab her from behind but was not able to as she fought, he stated.

Security footage showed Waters attempting to put the patient in a chokehold and pulling her over the back of the wheelchair. Waters was taken to the Charles B. Webster Detention Center.

Doctors Hospital said there were no arrests at the hospital and that Waters is a security officer for Sizemore Inc.

Sizemore Security, the security contractor for the hospital, did not return a message left for comment.
Augusta Chronicle