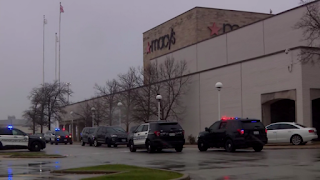 Two men tried to rob a jewelry store at the mall but were met by the security officer, police said.

The robbers then pulled out weapons and fired several rounds hitting the security officer.

The shooting occurred just after noon at River Oaks Center in Calumet City. The guard was transported to a hospital, where he later died.

About 20 people were inside the mall at the time of the shooting and police were working to interview them, Calumet City spokesman Sean Howard said.

On Wednesday night, all three men were on the run and wanted for murder.

The security guard was at the entrance of the store when the robbers ambushed him and immediately fired rounds.

The security officer did not have time to react.

The three robbers then used their weapons to break a display case and steal jewelry. This all went down in under a minute.

As the robbers left the store, they stepped over the bleeding security officer, and then ran out of the mall with the goods and those guns.

“It was just like, ‘Pop, pop, pop, pop!'” said Feras Abusumayah, who was locked inside the mall. “Immediately like, we knew it was gunshots, and they closed the thing. We ran to the back.”

Police were questioning witnesses and reviewing surveillance video from the mall in an effort to identify and track down the suspects, who fled the scene in a car, said Calumet City police Chief Kevin Kolosh.

At the time of the shooting, about 20 officers were conducting training in a building adjacent to the mall, Kolosh said and immediately rushed to the scene.

Hospital security fatally shoots man who pulled a gun on him