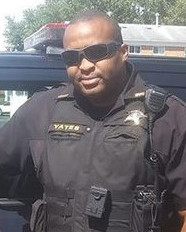 CLARK COUNTY OH July 25 2022— A Clark County Sheriff’s deputy has died, and another was injured following an officer-involved shooting at a mobile home park Sunday.

Sheriff Deborah Burchett confirmed Deputy Matthew Yates, a 15-year veteran of the force, was shot in a residence at the Harmony Estates Mobile Home Park Sunday morning. Yates was flown to Miami Valley Hospital, where he later succumbed to his injuries.

Burchett said the Sheriff’s Office received a 911 call at 10:51 a.m. Sunday morning, reporting that an unknown female had broken into a residence in the 1100 block of Ashwood Drive and fired five to six shots.

Upon arrival, deputies attempted to check the inside of the residence and that’s when Burchett said they were shot at and Yates was hit.

“The Clark County Special Operations and several surrounding tactical teams were called in and facilitated a rescue of the downed Deputy,” Burchett said.

Our crews on scene reported several law enforcement agencies and SWAT crews conducted an hours-long standoff at the residence after the shooting was reported.

Our crew also saw a second deputy get loaded into an ambulance around 1:30 p.m. The extent of their injuries and their conditions are unknown at this time. Major Chris Clark with Clark County Sheriffs’ Office confirmed the other deputy involved was not shot.

Firefighters and tanker trucks were called to the scene Sunday afternoon after a fire started in the residence on Ashwood Drive. Ohio Attorney General Dave Yost shared a photo of the aftermath and a trailer destroyed by fire in a tweet offering condolences to Yates’ colleagues and family.

“Deputy Yates was a 15-year veteran of the Clark County Sheriff’s Office and was a valued member of the Special Operations Team,” she said.

The Ohio Bureau of Criminal Investigation was requested to investigate the incident.

A spokesperson for BCI did not provide any additional details Sunday as the scene remained “fluid.”