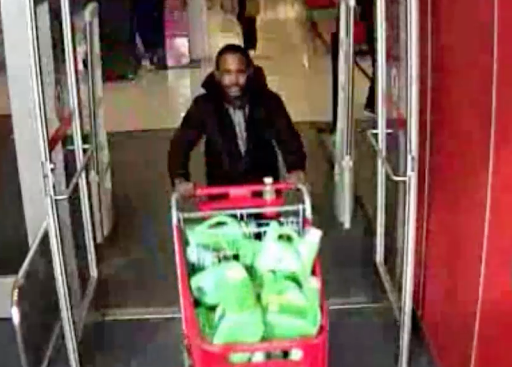 NEW YORK NY March 1 2021 A man stealing laundry detergent from a Brooklyn Target sprayed a police officer and a security guard with an irritant as they tried to apprehend him, police said.

Store security spotted the shoplifter making off with the detergent at the Gateway Center Target in East New York on Sunday evening and alerted an on-duty police officer, according to the NYPD.

The officer and a security guard tried to apprehend him, and a struggle ensued around 7:15 p.m., police said.

The shoplifter pulled out an unknown substance and sprayed it at the officer and guard before fleeing with the detergent, according to police.

The officer suffered irritation and redness to the eyes and was treated by EMS at the scene, police said. It’s unclear if the guard was hit by the substance.

Surveillance video released by the NYPD on Wednesday appears to show the suspect leaving the Target with a shopping cart full of detergent.

Police also said Wednesday that they’re searching for a man and woman who attacked two victims in their 70s over a parking space outside a ShopRite at the same shopping center.

Anyone with information is asked to call Crime Stoppers at 1-800-577-TIPS.

Lincoln man who shoplifted thousands in electronics, other goods is arrested