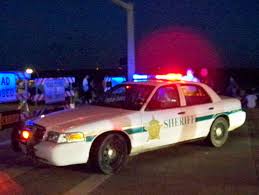 GALVESTON COUNTY, Texas May 28 2018– Officials are investigating an officer-involved shooting in Hitchcock.

A Galveston County deputy responded to an armed robbery at a gaming business where several men busted into a gaming room, disarmed and assaulted a security guard and robbed the business.

The three suspects knocked on the door of the gaming business shortly before 3:30 a.m., according to Hitchcock PD.

They were met by a security officer when a handgun was produced by the robbers, who then disarmed the security guard.

After taking an undisclosed amount of cash, police say the suspects tried to escape through the roof of the building. When that didn’t work, police say they left through another door to evade authorities.

Officials say the men tried to get away in a stolen vehicle but the deputy was able to shoot out the vehicle’s tires. All suspects were detained and taken to jail.

The deputy was not injured.

The Combined Law Enforcement Associations of Texas is handling the investigation.