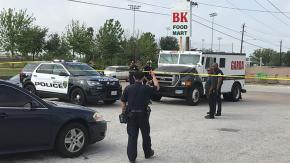 HOUSTON, Texas April 30 2017 What started as a traffic collision between a van and an armored truck quickly escalated to a confrontation with gunfire.

Houston police report that the incident occurred at about 9:30 a.m. Friday near S. Willow and Gasmer Streets.
A man driving a large, black van sideswiped a GARDA armored transport vehicle.
The two drivers pulled over into a parking lot near that intersection and things then escalated.

Moments later, eyewitnesses say that the driver of the van returned and was yelling at the armored truck security officers.

“I think he’s telling him to get out, get out and he won’t get out,” said eyewitness Maria Roberson.

The driver of the van now armed with a tire iron, which he used in an attempt to bash in one of the windows of the armored car. Moments later, eyewitnesses tell police that one of the guards shot at the man.

Eyewitnesses said the guard was yelling at the other driver not to try to go back into his van. He did anyway and eventually took off.

Police have not said what motivated the confrontation.

Police do not know if the driver of the van was initially trying to rob the armored vehicle for any cash of if this was a road rage incident.

Police said that an alert citizen saw a black van matching the description of the van from the incident  about six miles away, near the S. Loop West and Almeda Genoa and they called police, who came in and arrested the driver without further incident.

No one was seriously hurt. Police have not listed the charges that the van driver is facing.