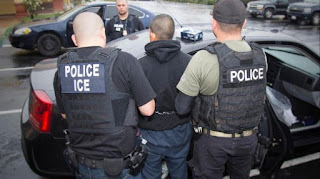 A private security officer working at an apartment complex in Orlando Florida noticed a large number of what appeared to be illegal immigrants coming and going from one of the apartment units late at night for more than a month.

The security officer knew that only an elderly woman was on the lease at that unit and questioned her about the unauthorized persons on the property.
The woman replied that they were family members moving to Florida from Texas and that they would be gone in a few days.

Fearing that the possible “illegal” immigrants would flee the area if he did not notify authorities, the security officer called the local Customs and Immigration office and reported his suspicion.

ICE agents did respond to the area and several persons were taken into custody by federal agents.

The tenant of the apartment may also face criminal charges and be evicted from the federally subsidized apartment.

While controversy swirls around the issue of local law enforcement, citizens and governments aiding in the efforts to search out and arrest illegal immigrants, private security are also finding themselves at the forefront of the issue.

Security officers are often assigned to low income housing complexes, trailer parks, agricultural facilities, retail stores and other areas where they may come face to face with possible illegal persons.
Some employers and clients have already instructed security personnel to ignore and avoid any unnecessary interaction with questionable persons so that they don’t get caught up in this issue and they’ve been told not to aid efforts in identifying possible illegal immigrants.

Once again private security faces a moral, ethical, business and legal dilemma. One that may not be so easy to decide.

Please send your thoughts on this issue to helpdesk@privateofficer.com

Please let us know if your company has encountered any issues involving this topic.