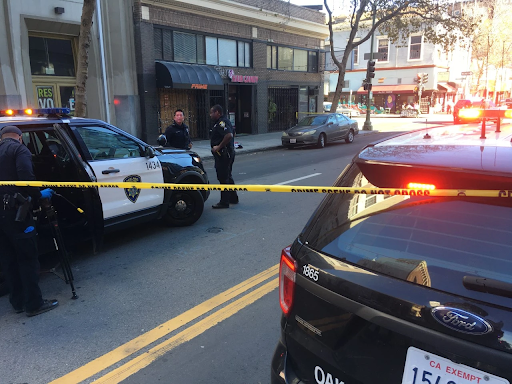 OAKLAND, Calif. Nov 26 2021 A $17,500 reward is available for information on the attempted armed robbery and shooting involving a KRON4 security officer.

Police say the incident was an attempted armed robbery to steal camera equipment.

The KRON4 crew was covering a story on a recent smash-and-grab robbery where 12 thieves wearing masks and hoods raided the Prime 356 clothing store on the 300 block of 14th Street.

During the report, shots were fired around 12:20 p.m. Wednesday.

The KRON4 security guard was shot in the lower abdomen and taken to Highland Hospital for surgery, according to police.

As of 4:00 p.m., he is out of surgery and in stable condition. The security officer is a former police officer.

Officers later found two more victims involved in the incident. One of those victims is a Berkeley man who was also transported to Highland Hospital for treatment and is listed in stable condition.

KRON has not received information on the extent of the injuries.

The KRON4 reporter managed to still do her job, recording the scene after the incident as it unfolded before her eyes. She was not physically injured but is understandably shaken.

“As you know it’s been an extremely violent week. We are asking if you were in the area, have a business or live nearby to please check your surveillance footage as you may have captured the crime before, during, or after it occurred,” Oakland police said in a press conference.

In the past, a number of Bay Area news stations have been targeted for their camera equipment by a number of thieves.

“At KRON 4, the safety of our personnel is our top priority which is why we assign security to reporters when working in the field. Most importantly, our thoughts and prayers are with the security guard and his family and we wish him a complete recovery,” KRON4’s Vice President and General Manager Jim Rose said in a statement.

Police and the security company associated with the guard are offering a reward of $17,500 total leading to the arrest of the individual, or individuals involved in the incident.

Anyone with information is encouraged to contact investigators at (510) 238-3426.