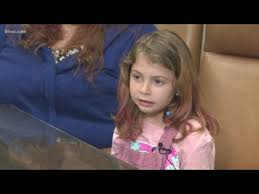 The incident happened one year ago on the 5500 block of Airline Drive.

Attorneys said the security guard fired 10 shots, hitting not only the suspected thief but also a 6-year-old girl who was sitting in the backseat of her father’s car.

They were waiting in a nearby McDonald’s drive-thru line.

The Tidwells were about 30 yards from the store.

“She said, ‘Dad I’m hurt.’ I turned around and I saw blood,” Danny Tidwell said. “I would’ve assumed it was a gang fight or something, but it turns out it was somebody who was being paid to do that. And as far as that guy was concerned, he thought he was under orders to do that.”

The Tidwells are suing the company that owns the T-Mobile store.

“I have never seen a case like this with a security guard that acted as a vigilante,” attorney Rob Ammons said. “This security guard was dressed in camouflage. That should be a red flag to any store owner or franchise owner. That tells you this is a fellow who thinks he’s Rambo, not there to protect the store and the employees of the store, or the customers.”

The bullet that struck Claire was removed from her leg.

She has had to re-learn to walk.

The Tidwells said their son, who has special needs, was traumatized by the shooting.

The family and their attorney say they never want anything like this to happen to anyone else.