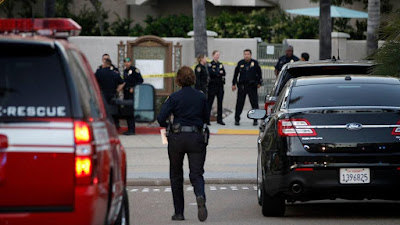 San Diego CA May 1 2017 One woman was killed and seven people were wounded, several critically, when a man opened fire Sunday at a San Diego apartment complex swimming pool where a number of adults were attending a birthday party.

Police rushed to the apartment building in the University City area and fatally shot the man after he pointed his gun at officers, San Diego Police Chief Shelley Zimmerman said.

Authorities received several calls just after 6 p.m. about the shooting at the La Jolla Crossroads apartments, an upscale complex in the 9000 block of Judicial Drive.

The reports were grim: a white man wearing brown shorts was armed with a gun and shooting at what two witnesses described as approximately 30 people around the pool, most of them African American.

A police helicopter reached the area first and, from above, authorities could see a shooter near the pool who appeared to be reloading his weapon, Zimmerman said.

Three police officers arrived and went to the pool area. There, the gunman pointed what was described as a large caliber handgun at police, and all three officers opened fire. The gunman, identified as Peter Selis, 49, was pronounced dead at the scene.

Seven people, all adults, were hit by gunfire: four black women, two black men and a Latino man. A black woman later died at the hospital. Her name was not released. A black man broke his arm while fleeing the shooting, Zimmerman said.

It was unclear what motivated the shooting and police were still interviewing witnesses, including the responding officers. Zimmerman said the gunman and at least one of the partygoers lived at the apartment complex.

A resident at the complex told KFMB-TV, the CBS affiliate in San Diego, that he was in his apartment about 6 p.m. when he heard gunshots followed by yelling and screams. He said he ran to his building’s clubhouse, where he could see the pool.

The shooter seemed at ease, he said, while bloodied victims struggled.

“He had his beer in one hand and his gun in the other,” said the witness, who provided only his first name, John, to the news station. “There were two victims lying on the ground, one trying to crawl toward the other one to help.”

Police said the eight victims were taken to the hospital. Witnesses said the group appeared to be celebrating a birthday party in the pool area.

Amberjot Riat, 22, and Kaela Wong, 20, were in the jacuzzi at the apartment complex when the gunfire erupted. Riat said they stayed in the water in hopes of avoiding the shooter’s attention.

After leaving the jacuzzi, they said they moved to a wall and heard the gunman speak to young women who were attending to a wounded friend. “You can either leave or you can stay here and die,” he reportedly told them.

Police were unsure if Selis knew any of the victims.

Records show Selis filed for bankruptcy in 2015. He listed his occupation as car mechanic for a San Diego Ford dealership and said he had two children and a stepson, according to a petition filed in the Southern District of California Bankruptcy Court.

A photo of “Pete” Solis on the dealership’s website shows a heavy man with receding black hair smiling at the camera.

Police set up a “reunification center” near Judicial and Golden Haven drives for loved ones seeking information about family and friends.