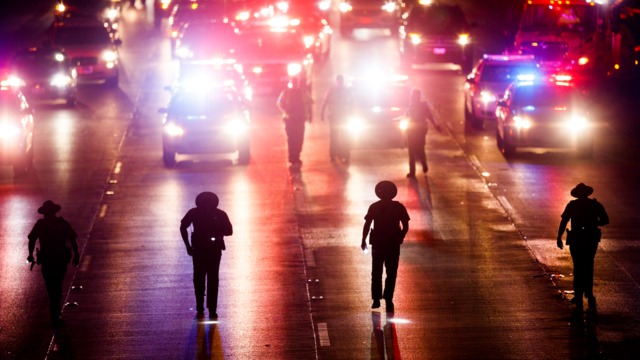 CHICAGO IL May 30 2018  — As Chicagoans held barbecues and visited parks and beaches amid scorching temperatures this Memorial Day weekend, at least 39 people were shot throughout the city, seven of them fatally, while police officials added more than 1,000 officers to patrol the streets.

Shootings happened in neighborhoods stretching as far south as West Pullman and Brainerd, to West Side communities like Austin and East Garfield Park and to Northwest Side areas that usually don’t see much violence like Portage Park and Albany Park. One strangulation death also was reported.

With the shooting tally from 3 p.m. Friday through 6 a.m. Tuesday, this year’s Memorial Day weekend was less violent than last year. For the entire holiday weekend in 2017, 45 people were shot, 7 of them killed, according to data kept by the Tribune. Seventy-one people were shot, six fatally, throughout the same weekend in 2016 — one of the most violent Memorial Day weekends in years.

The extended weekend is typically one of the busiest of the year for the Chicago Police Department. More than 1,000 extra officers were deployed to address any flare-ups in violence.

“We’re balancing the officers that I need on the lakefront, and I’ve got my gang teams and my (saturation) teams and those guys that are working in the districts targeting not only the individuals that are driving the violence but the gangs that are creating the culture that’s allowing this violence to occur,” said Nagode, who oversees street patrol operations on the North, Northwest and West Sides.

Officers also descended on beaches and parks south of Fullerton, the downtown area that includes North Michigan Avenue and the South Loop. Much of their efforts focused on large groups of youths that were at times roaming through those areas, some of them causing disruptions to people and businesses. In one instance, groups of teens damaged property at a Target store at Roosevelt Road and Clark Street, Chicago police said.

Several people from these crowds were arrested on misdemeanor reckless conduct and disorderly conduct offenses during the weekend. Officers would corral the groups onto CTA Red Line trains at Chicago Avenue and State Street, forcing them to ride toward the South Side, police sources said.

The crowds swelled so much at Chicago and State that, according to CTA spokeswoman Irene Ferradaz, a Red Line train was stopped for almost 15 minutes at the request of police to get people off the train. Buses were also deployed to transport people away from the area.

Much of the teenage crowd aboard the trains exited at 35th Street and tried to make their way east toward the lake, only to be met by more cops along the way, police sources said. At least one robbery was also reported involving the crowds Sunday night.

“A lot of it is the nuisance that they’re doing. It’s part of what we get with teens,” said Nagode. “The resources it would take me to lock up 100 kids who were fighting would be tremendous, so we have to mitigate, stop the problem and do what’s necessary to make (everyone) safe.”

Chicago police efforts included pre-weekend raids with federal agents, leading to more than 100 arrests, mainly on illegal guns and drug charges. In the last few years, these raids have become highly publicized by Chicago police ahead of holiday weekends.

Also this weekend, a Chicago police sergeant was grazed by a bullet in her ballistic vest Saturday night when someone from an SUV shot at another vehicle in the city’s West Town community. Early Sunday, a 19-year-old woman attacked two Chicago Fire Department paramedics in the back of an ambulance that was also struck by a bullet during the episode in West Englewood.

Six fatal shootings happened in parts of the South and West sides long stricken by violence, drug-dealing and poverty. But the first homicide occurred Friday in the West Garfield Park neighborhood when a woman was found by a passer-by strangled in a vacant lot outside an abandoned building in the 4500 block of West West End Avenue.

The first person shot to death during the weekend was in the Brainerd neighborhood, when 36-year-old Michael Bell was shot and killed and a second man was wounded, Chicago police said. Two people, at least one of them armed with a gun, approached Bell and the second victim and asked for a cigarette before opening fire, police said.

Bell had been shot at least two other times in his life, in September 2012 and April 2001, according to police.

Early Saturday, 34-year-old Timothy Brown was found fatally shot outside an apartment building in the 2300 block of West 70th Street in West Englewood. The area where Brown was killed is known for narcotics activity and detectives are looking at his death as possibility being drug-related, police said.

About 8:40 p.m. Saturday, 20-year-old Bobbieana Slyons was with her mother and daughter when she was shot and killed in the 800 block of West 76th Street in the Auburn Gresham community. Police said the gunfire was believed to have come from a red car and she was not the intended target.

About 20 minutes later and nearly six miles away, China Marie Lyons-Upshaw, 17, was shot and killed inside her bedroom at her home in the 800 block of East 49th Street in the Bronzeville neighborhood. Police spokesman Anthony Guglielmi said on Monday officers were looking for “a male companion” who is believed to be the shooter and detectives are trying to figure out if he fatally shot Lyons-Upshaw accidentally.

Hours after Lyons-Upshaw’s death, in what was believed to be an unrelated shooting, a man was found gunned down about a block or two away with a bullet wound to his chest. Police said the victim’s body was found inside a vehicle in the 5000 block of South Drexel Boulevard about 8 a.m. Sunday.

Early Monday around 1 a.m., Jeremy Ross, 31, was fatally shot in his head and chest near Flournoy and Laramie avenues in the Austin community. Guglielmi said Ross and the shooter were “arguing over a girl” before the shooter opened fire then ran away.

The final fatal shooting of the long weekend happened around 9:10 p.m. on Monday in the West Side’s Lawndale neighborhood.

A 30-year-old man was found shot in the head in the 800 block of South Albany Avenue.