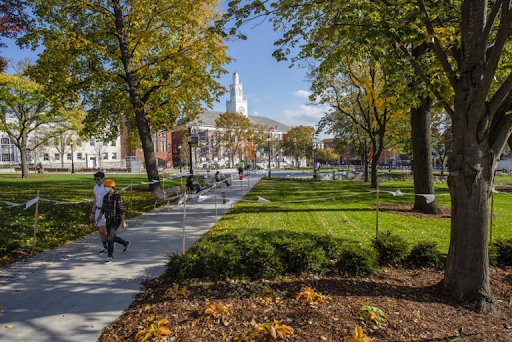 Come November, Burlington is expected to have a new unit dedicated to patrolling the Queen City’s green spaces.

The city is launching an urban park ranger program, an idea brought to the city by Cindi Wight, director of Burlington Parks, Recreation & Waterfront. It’s being funded through Burlington Police Department attrition savings, one result of last summer’s City Council decision to reduce the force’s staffing cap by 30% and reinvest the money saved into community services.

The park rangers will be a supervisory and educational team, city officials said. Their main goal is to educate residents about the city’s public space rules and respond to low-level infractions such as dogs off leashes and open containers, complaints that would otherwise be sent to police, who likely would not have the bandwidth to respond.

The park rangers are not intended to offset the burden on police that some say has increased since last summer’s council vote, a decision that has driven some officers to leave the force. Overall, the department has lost about 20 officers since last summer. But those in the police department say the new rangers are likely to have an impact on their increasing workloads.

Wight said she brought the idea to city leaders long before the council voted to trim the police force through attrition. She said she’s visited cities across the country with similar urban park ranger programs and thought Burlington could benefit from the idea.

“The key part of the rangers is providing education and presence in our parks,” Wight said.

In a statement provided to VTDigger, Mayor Miro Weinberger said the rangers will also provide guided tours of the parks and engage with school groups.

“The park rangers are another way we are working to ensure Burlington’s public spaces remain open and accessible for everyone in the community to enjoy,” he said.

The city is budgeted to spend $111,650 a year on the two full-time positions.

Wight said the rangers would have some power to enforce rules, but she sees that duty as a “last resort.” She said rangers will educate people about park rules and explain the reasoning behind them. When someone’s dog is running around a park off leash, which is against the rules, a ranger would help the owner understand why that is not allowed.

But if the owner refuses to put the dog on a leash, a ranger could write a ticket, she said.

She said she imagines that a ranger will be stationed at City Hall Park all summer long, as it’s one of Burlington’s busiest green spaces. The city hired a private security group, Chocolate Thunder, to monitor City Hall Park this summer at a cost of about $10,000 a month. That contract has been extended through October.

The rangers are expected to work with Lacey-Ann Smith, the community affairs liaison in the Burlington Police Department. Smith wears many hats but essentially acts as a social worker for people who come into contact with police officers or other city workers.

She helps people experiencing homelessness get connected to services, runs a community service program for people in the court system and responds to quality-of-life issues such as noise complaints.

Smith said she expects the rangers to handle a lot of off-leash dog complaints, which come to the police department frequently. They will also respond regularly to camping violations in city parks, which usually involve people experiencing homelessness, Smith said. Rather than issue tickets, rangers will aim to help people find emergency housing.

Smith also expects the new positions will help lift some responsibilities of police officers, especially in the busy summer months, so they can respond to more pressing calls.

“Right now, we’re limited in our ability to respond,” Smith said. “So there’s a possibility that there’s going to be no response, depending upon what the issue is.”

Similar urban park ranger programs have been criticized in other parts of the country. Portland, Oregon, which has also been reevaluating its public safety systems, recently hired more park rangers instead of traditional cops to address a rise in gun violence.

In a commentary published in Portland State’s student-run newspaper, the writer said the plan promotes an “unhealthy dependence on security and false authority as a solution” to rising gun violence. More park rangers, they wrote, will not address institutionalized racism in Portland’s policing systems or provide services to residents to keep them from falling into the criminal justice system.

To make sure Burlington’s urban park ranger program won’t over police the marginalized, Smith said she thinks the program needs to be intentionally created to assist people who need help. With an ongoing issue, Smith said, the goal is to use “the resources in the community to try to come up with an alternative solution.”

“You can ticket somebody until they’re blue in the face,” she said. “But does it really matter when they don’t have any income, to begin with? Is it inherently really a solution?”