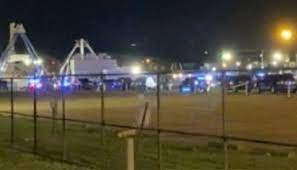 Police said that two teens crashed the gates, and more than 100 rounds were fired.

Calvin Berry, 15, and Leedrick Trim, 16, were arrested by Hinds County Sherriff’s deputies and booked at the Henley-Young Juvenile Justice Center.

According to the Hinds County Jail’s website, Berry is being charged with two counts of aggravated assault, while Trim was charged with three counts.

Both are charged as adults.