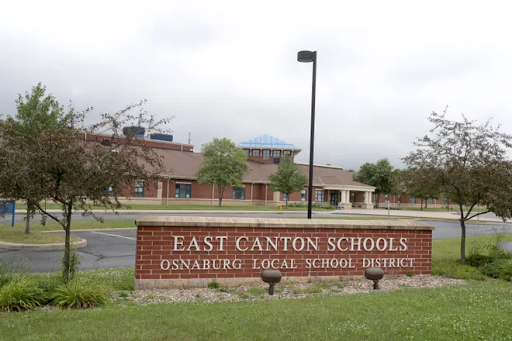 EAST CANTON OH July 20 2021 – Osnaburg Local School District officials are breaking with the village Police Department for school resource officer services and will have that duty provided by the Stark County Sheriff’s Office.

The change takes effect with the upcoming 2021-22 academic year.

“I really didn’t get a good explanation,” East Canton Chief Derrick Blake said. “I can only speculate. They said the school board decided it. I think it was the sheriff’s office is so much bigger than us; their power to get larger grants.”

Efforts to contact Superintendent Kevin Finefrock of Osnaburg Local were not successful.

But a written statement from the school system and village says “there is a mutual understanding and desire to have an added focus on drug awareness and other trainings within the school.”

Osnaburg Local operates East Canton High School, a middle school and an elementary school. These schools are in one complex in the 300 block of Browning Court N.

One member of the Osnaburg Local Board of Education said the change involved a matter of receiving more enhanced service for the cost. The school system does pay for the school resource officer service.

“The cost had gone up, I want to say 7% or 8% from what we had been paying previously,” said Stephan Kimbel of the Board of Education. “If you can get a little more resources from the Stark County Sheriff’s Office than what you can from the village, it made sense to do that. The village didn’t have anything more to offer than the sheriff.”

“It varies from year to year,” said Kurt Geis, village fiscal officer. “There was a lot of things in the agreement they were paying for; Medicare cost, there are uniform allowances.”

Efforts to contact Mayor Kathleen Almasy were not successful.

What is next for the school resource office for Osnaburg?

As of now, the County Sheriff’s Office has not selected who will be school resource officer for Osnaburg Local.

The service fee “depends on what officer is assigned there,” said Maj. C.J. Stantz of the sheriff’s staff. “They pay whatever the officer’s wage is.”

One of the factors Kimbel mentioned was the extent of services the county has in its Drug Abuse Resistance Education (DARE) program. Kimbel also said the sheriff’s staff has a more impressive school resource officer program.

“Their primary duty is to provide security there,” Stantz said. “They do a lot of other stuff. They help teach DARE programs to the students.”

The major also noted that many of the students enrolled in Osnaburg Local schools live outside the village and in Osnaburg Township. The township falls under the county sheriff patrol and investigative jurisdiction. If an incident occurs to a student at or near their township home, sheriff deputies can be deployed to investigate.

“Many things can happen with school (students) that don’t necessarily happen at the school,” Stantz said.