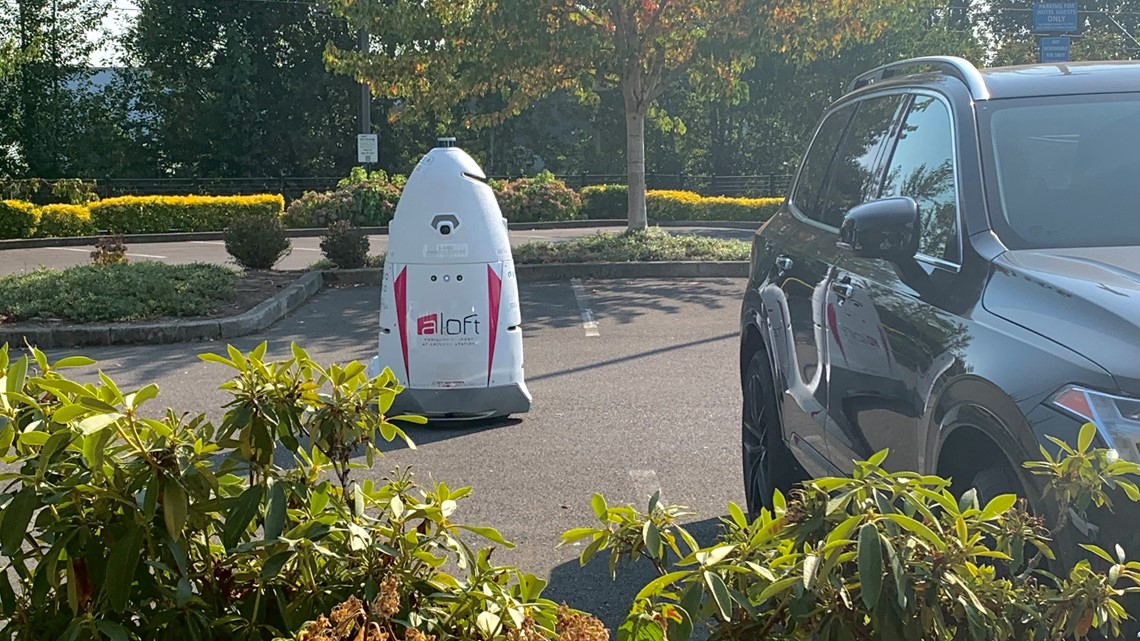 PORTLAND, Ore.  Sept 6 2022— The Aloft Hotel at Cascadia Station is rolling out a new kind of security guard.

The management has enlisted a robot to deal with vandalism that they believe comes from homeless encampments in the area.

“We had to try to find a different solution that could work 24 hours a day that was affordable,” he said.

That solution is Robby. The R2-D2-adjacent robot stands about 5 foot, 3 inches tall, weighs 350 pounds and runs in random patterns as it patrols.

Daley said that they first deployed Robby back in December to roam the parking lot and it’s made a difference.

“We haven’t seen incidents here in months and I think it’s just due to his presence,” said Daley.

“So if he sees that there is a heat source behind a vehicle he’ll go investigate that heat source,” said Daley. “He scans license plates as he rolls around constantly.”

Anytime it detects someone, the robot immediately alerts the front desk. That person can then see what the robot sees. They can talk to people in the parking lot through Robby, and determine if they need to do more, like call 911.

“He’s 24 hours a day, 7 days a week,” explained Daley. “If I hire humans to do that job, if we can even find people to do the job, it would be five to seven times more money than it costs for the robot.”

Hotel guests such as JT Thomas welcome the idea of a security robot.

“I think that would be a plus. Having something like that around definitely makes me feel secure and safe that my car is being watched at all times,” Thomas said.

As for Daley, he thinks security robots like Robby would do well patrolling other places.