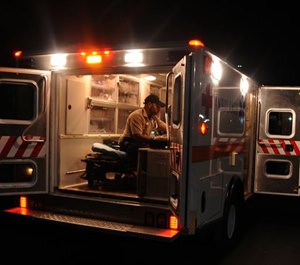 CONROE, Texas June 16 2022— An EMS provider disarmed a patient who took out a gun and fired twice inside a hospital emergency department, Conroe police said.

She was on a gurney in a hallway with her arms and legs secured when, according to police, Johnson-Jackson took out a small caliber firearm from an elastic waistband-type of holster that was wrapped around her torso beneath her dress.

“One of the HCEC EMS attendants took immediate action and disarmed (Johnson-Jackson),” Conroe police wrote in a news release.

Two shots were fired, but no one was injured.

Johnson-Jackson was arrested and charged with felony deadly conduct and a misdemeanor count of unlawful carry of a weapon in a prohibited place. She was booked into jail.

The shooting is under investigation.

Families of Chicago cops, firefighters who die by suicide will get benefits